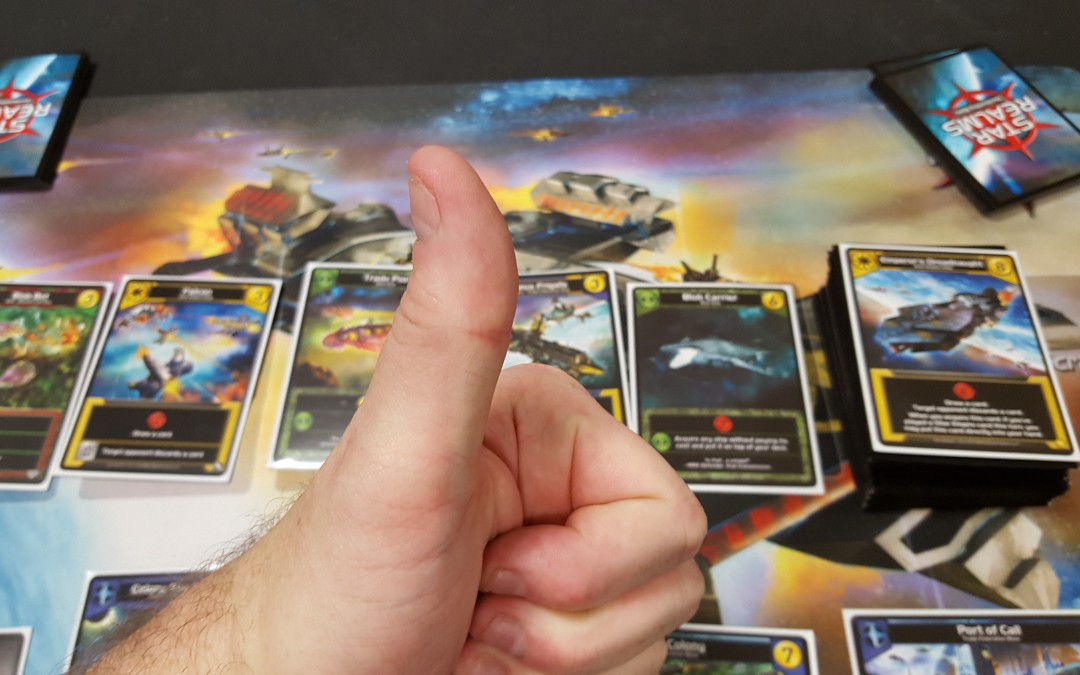 Star Realms has rules.  Not many though.  I mean, there are things about Ally triggers and turn structure and basic math, but really there are only two rules that matter:

I recommend all of these if you’re at all interested in the community, finding new players, idle bragging, and discussing just how awesome that handsome Australian man is.

I didn’t steal any ideas from Star Realms: Rescue Run, but you should buy it anyway because it’s really cool, and Jon Del Arroz is a super-talented writer.  Rescue a copy here.

PLAYING WITH ALL THE CARDS

This isn’t really a new way to play, but if you’re playing with every card that could possibly go into the Trade Deck, a two-player game Trade Deck would be about six thousand cards. Every Single Card Possible for a Two-Player game! Chrysler Building for Scale.

If you have an unwieldy tower of certain death, you can split the pile into five smaller and more manageable piles, placing them on the five Trade Row spots.  When you reveal, you reveal the top card of the empty spot.  As long as the master pile was randomised, the piles should also be random.  If you do happen to run out of cards in one pile, just redistribute from another. And I just flip over the top card you say…? YEAH! YOU DID IT!

This one comes from our friends at Tasty Minstrel Games.  These folks designed Cthulhu Realms based on our game engine.  When it came to the 3+ multiplayer rules, they had an amazing idea.  It’s very cool, and it fits the space theme really well.

The setup goes like this: place the Trade Deck in the middle of the table, and then deal out the Trade Row in such a way that a 3-card arm points to the space between each player. If this were a pirate game, the treasure would be here. You can make a Star Shape! Far easier than making a Realms shape.

Players can only acquire or affect/be affected by cards that are in the arms closest to them.  You’ll notice that each player has access to six cards rather than five.  That’s because six is more fun.  Also it makes this version of the game work.  So shush.

If a player is eliminated, scrap every card to which that player had access, and redistribute the pattern to suit the new number of players.  You probably won’t run out of cards, but reshuffle the Scrap Pile into the Trade Deck when you do.

Heroes are quirky fun.  Let’s keep them around for a bit longer with this: Yuriana Torres is not known for her loyalty,

Simple idea.  Set up as normal, but with this extra rule: Hmm…I have so much Trade. Shall I take the risk? This one came from the Facebook group.  I want to say it was Legend Series winner Matt “the Cutter” Newburg’s idea, but regardless, I’m stealing it.

Events and Gambits are a lot of fun, and they mix up the standard Star Realms experience delightfully.  This suggestion makes Events more…eventful.

Normally players get a random selection of Gambits and they start the game with them.  This variant says neither player starts with a Gambit, but each time an Event comes up in the Trade Row, each player immediately gets a random Gambit card. I don’t know about you, but nothing quite takes the sting off a Supernova than getting “Draw 2 cards” on a stick.  (I guarantee you that previous sentence has never been written before in the history of language).

I got to playtest the Mission cards when they were being designed, and they were a LOT of fun.  These are minor tweaks to the Mission card rules.  Normally a player gets three face-down, and can look at them at any time.  Two variants: What’cha got over there? Some kind of Missions?

You can even combine the variants, but that’s weird.  You’re being weird right now.

You like the new ships and bases in Star Realms United?  You want more?  Create your own!

For two players, each player is randomly assigned two of the core factions.  You can do this by shuffling up one card of each faction and dealing them out.  Make a note of which player was assigned each faction pair, because those factions will trigger each other’s Ally abilities. Did I say shuttle? I meant… Shuttles are ok I guess

For more than 3 players, just give each player a random two-colour combination.  It doesn’t matter if they overlap, especially if you’re also using the Sector War variant above.

And finally, because it’s the time of the year that traditionally suggests gift-giving, a simple rule:

What a great way to get rid of junk from the Trade Row, and also fulfill your gift-giving obligations!

That’s all we have for now.  If you have more fun variants, let us know!  And from everyone here at White Wizard Games, have a wonderful Christmas and/or Holiday celebration, and keep away from that frozen death water people sing all those songs about.

Ian Taylor is a writer, comedian, game designer, and a handsome Australian man. He spends his days in Central Massachusetts doing some combination of those four things.