Many people are playing with the Colony Wars set now and wondering if there are any strategies specific to Colony Wars. When you’re playing Colony Wars, you should be trying to use your first few turns to quickly pick a direction to focus on with your deck. Based on what cards are in the Trade Row, what cards are in your hand and what cards your opponent has acquired, you need to decide what plan to use and then figure out how best to execute that plan. Here are some of my favorites:

One of the biggest differences between Colony Wars and previous Star Realms sets is the inclusion of cards that can be acquired directly into your hand when you play a card of the appropriate faction first. Interacting with these cards correctly can be crucial to winning when playing with Colony Wars.

When one of them appears in the trade row, here are some things to consider:

Like most sets, Colony Wars has a few cards that can give you a huge advantage if you can acquire them in the early game. I’m especially impressed with the early power of the following cards: Parasite, Supply Depot, and The Oracle. Not surprisingly, many of the most expensive cards can also be total game changers, especially: Factory World, The Wrecker, The Incinerator, and Leviathan. Aging Battleship and Stealth Tower have power levels a bit like Stealth Needle, in that they are usually mediocre in the early game, but they become must acquire cards in the mid-game, and some of the best cards possible in the late game. 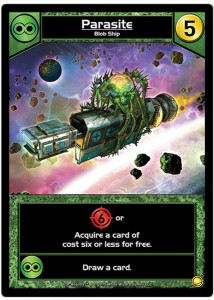 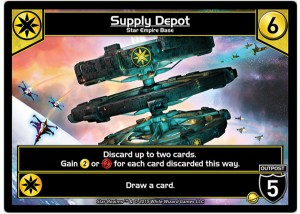 Colony Wars has many cards that can scrap themselves to powerful effect: Repair Bot, Stellar Reef, Cargo Pod, Falcon, Bioformer, Frontier Ferry, Gunship, Aging Battleship, and Plasma Vent. For the most part, it will just require lots of experience playing with Colony Wars to get a good feel for when and if to scrap these cards. My general rule for Gunship and Bioformer is to only scrap them to acquire cards that cost seven or eight, and even then, usually only in the early to early mid-game. For the rest of these cards, I try to avoid scrapping them in the early game or the mid-game, but I try to be aggressive about scrapping them in the late game, especially the ships. In the case of Cargo Pod and Repair Bot, I will often scrap them a much closer to the early game, because they can often be so weak in the late game that I just want to make sure that I can’t draw them in the late game. 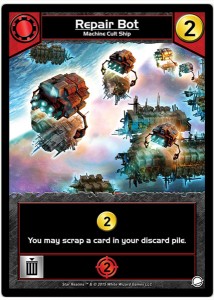 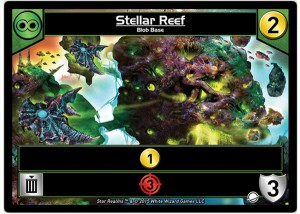 While the general strategy for Colony Wars remains the same as with the base set of Star Realms, there are some new things to consider. Eventually as you try out these strategies and cards enough times, you will get a good feel for each of them and hopefully enjoy the new twists that Colony Wars adds to the game.