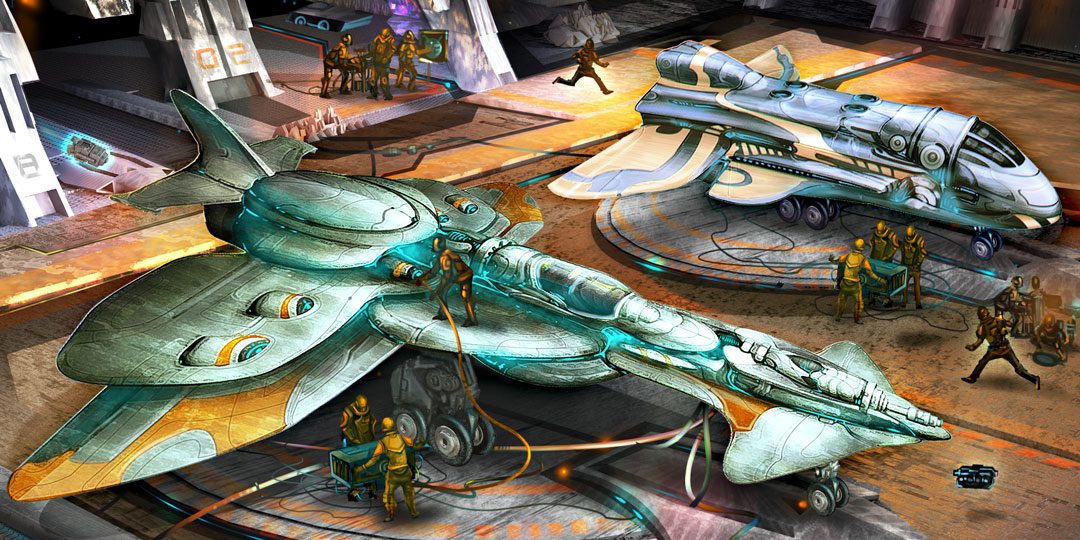 Another throwback format this week: Last seen in June, here is the return of Frantic Preparations. Here is my article from Week 9 discussing the format as it was. Once again, Frantic Preparations punishes sloppy play, by speeding the game right through the midgame. This week, for most games, the midgame is nearly nonexistent and if you aren’t prepared, you will bounce out very quickly.

That has happened to me, repeatedly. I am 3-7 so far this week. This is a “learn from losing” week to be sure.

The Frantic Preparations scenario rule features the smallest starting deck of any Arena:

Before the game begins, a Viper and a Scout are removed from each player’s deck.

An eight-card starting deck has the effect of changing the beginning of the game slightly as well as nearly-completely removing the midgame, which I explore in the next section.

We’re playing with the Core Set starter, and the Crisis: Bases and Battleships and United: Heroes packs. The trade deck begins with 104 cards, of 12 of which can be acquired directly to play (the Heroes). The inclusion of those two packs makes this format much, much easier to scrap-out than before.

I’ll begin by quoting from my last article, because this has not changed:

In this series of articles, I often describe how some formats allow a player or a play-style to determine the flow of the game. This week, player two controls how the beginning of the game will play out, because they shuffle their deck first.

Because starting decks have only eight cards, player two shuffles their deck at the end of their first turn. Normally, with a ten-card deck, both players shuffle after their second turn. In this format, player one still shuffles after turn two but player two gets a full turn jump. This means it is very possible for player two to have 7+ trade on their second turn! Impossible in the normal game (excluding Gambits)!

Both players should purchase with this in mind. If there is an expensive card on the board, player one should determine before they play a single card whether or not they are going to fight for it or fight against it. If there is only one trade-generating card to buy, player one has the chance to lock their opponent out of the race for the expensive card. But if there is more than one, this becomes impossible (as player one still begins the game with only three cards on their first turn).

Last time, I strongly suggested buying bases if you could not buy scrapping cards. This week, because of the increased likelihood of people scrapping out, I don’t believe most bases are worth it. The bomb rares (Death World, Brain World) are, as usual. 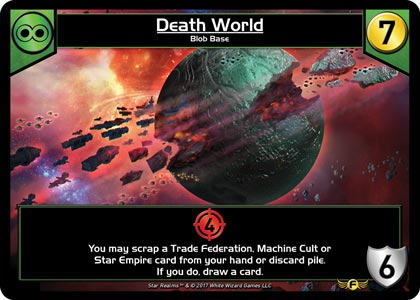 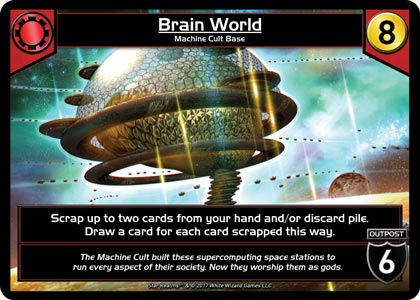 Again, quoting from the June article:

Because each player starts with two cards scrapped from their deck, shuffles happen faster than normal. Player two will shuffle after turn 1, then after turn 3 (usually), then after their 5th turn (assuming they purchase 7 or fewer ships). Normally the third shuffle happens after a player’s 7th or 8th turn!

Scrapping is powerful normally, but it is even more powerful in this format. Cards you scrap from your deck this week can mean the difference between shuffling on turn 5 or 6, and again on turn 7 or 8. It isn’t just about removing low-impact cards from your deck. Because we start with fewer cards than normal, the ability to manage your deck size around upcoming shuffles is increased.

All of this adds up to games reaching a very powerful state starting on Turn 14 (player two’s seventh turn). Because games are faster, the impact of a missed purchase or a bad scrap is magnified. There is very little margin for error. You need to think things through more than normal this week, because there is more to care about.

Neither Promo Pack is in this week, and Colony Wars is not in this week either. That, and the inclusion of Crisis Bases and United Heroes means that scrapping is much more reliable and powerful. (No scrap-from-hand only, no scrap-from-discard only.) Chancellor Hartman is an uncommon that wins games. Pick it up after the first shuffle though – I’ve lost both times I’ve purchased him too early. There is no use scrapping out if you don’t have anything nifty at the end!

The Only Way Is Scrap. (Nearly.)

If you do not scrap out before your opponent, you are almost certainly going to lose the game. The only reliable response I have discovered is to try to come back via a lategame tempo surge. The Trade Federation can push back with a late-game power spike, using Freighter to acquire expensive cards to the top of your deck. Add to that CEO Shaner or other cards that can draw, and you’ll be able to push back. There are plenty of powerful authority gaining cards this week, too. Cutter is still amazing, four years later, as is Construction Hauler and Chairman Haygan. 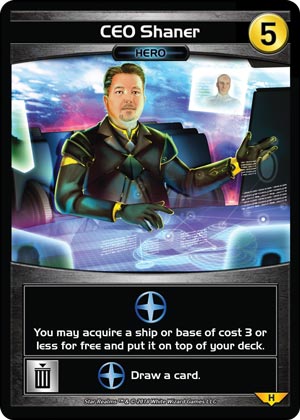 Whether you follow the Trade Federation path or not, pushing back with late game purchases can be a smart response to someone who gets the scrapping advantage. The Heroes can make a real difference in hitting those ally abilities, as always.

In the strategy thread on the Star Realms Fan Page on Facebook, it has been suggested that heavy discard is also a viable option. This makes sense on paper – if they have no starting cards in their hand, everything they discard is going to be great. I have not had any luck myself with this, but it seems like this should be a viable path and will keep at it this weekend.

Either way, scrap if you can… but you don’t always have that choice. Sometimes you have to make the best of a bad situation… and try to survive with team blue. Or maybe team yellow. I’m not seeing a viable path with the Blob this week.

I relied too-heavily on my prior knowledge of this format and got crushed, repeatedly. This week’s Arena is not like the last time we saw it. It is even faster, with even less room for error. May the shuffler gods smile favorably on you, and good luck getting this week’s foil.