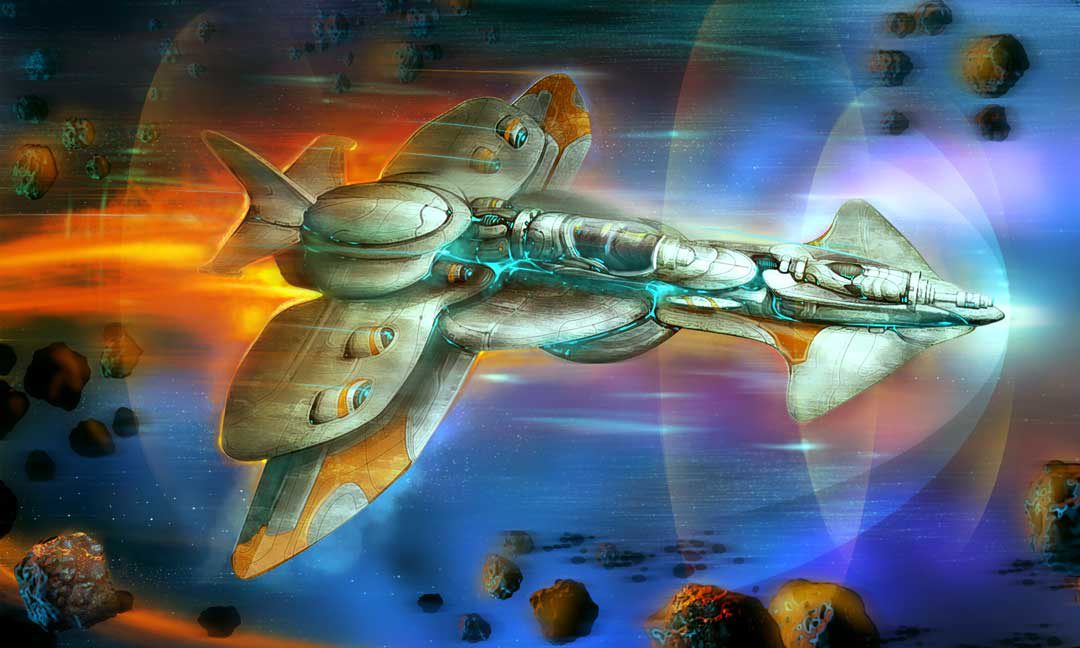 Events are back in the Arena! Hide the children! RUN FOR YOUR LIVES!!!!!

Events are the most-divisive card type in Star Realms. Some people can’t stand them. Other people like the challenges they bring. I love the unpredictability, because I try to use that to my advantage. While other people are flying blind, I have the power of math and statistics to save me.

This is what I tell myself, at least, and it seemed to do the trick. After a 0-2 start, I am on a roll with a pair of 6-1 Arena runs, giving me a foil and six more stars for the season. The Drive to 25 (and the Blob World seasonal challenge foil) is still on!

This week will challenge you to master the Events and to not scrap your Vipers. It’s Vipers For Hire!

The scenario rule for Vipers for Hire ensures that you will hit your ally triggers almost all the time.

As a player plays a Viper, they choose a faction. That Viper has that faction.

We’re playing with the Core Set starter, along with Crisis Events and Crisis Bases and Battleships.

This is a scenario not found in the Scenario pack for the physical game. It’s been fun exploring all of the design space this opens up! With two cards in your deck as mercenaries, able to ally with anyone, ally triggers are much more likely to happen. This has the effect of making the game faster as most ally abilities lead to more trade, more combat, or base destruction. My sixteen games have had an average game length of just over 17 turns. This is two turns faster per player on average, for games that use the Core Set as the only starter.

The Only Way Is Aggro!

Because you are going to hit your ally abilities, you are able to purchase cards in any faction and be reasonably-sure you will hit the ally trigger. This allows for much faster games than normal.

MATH TIME: Assuming you buy five or fewer cards before the first shuffle (and assuming both of your Mercenary Vipers are shuffled into your new deck), you have a better than 50% chance of getting the ally ability to hit. (You can use this odds calculator to confirm. Assuming you draw Battle Pod first in your new deck, you have at most 14 other cards, two of which are Battle Pods. In that scenario, you will ally Battle Pod 50.8% of the time, more often the later you draw Battle Pod.) 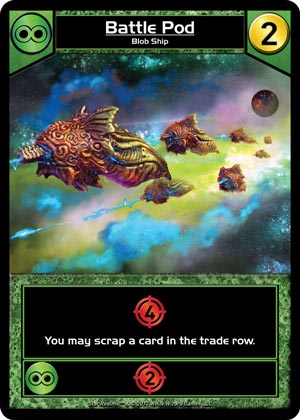 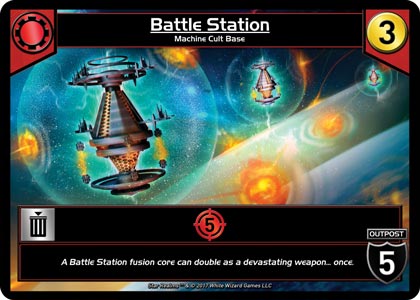 With this much damage coming so quickly, there are several cards that gain and lose in value. Generally, most bases are not worth buying this week — see my discussion about bases from last week’s article but in reverse. Bases generally do not survive past the turn you play them, so they are generally worse than a ship at the same cost. However, bases that are stat-heavy (and not text-heavy) end up doing just fine. Battle Station is an incredible buy – I don’t think I lose a single game with it in my deck. Buying it in the first shuffle means an extra 10 or even 15 authority throughout the course of the game, and you can scrap it for those final five points of damage near the end of the game.

Scrapping is generally weaker than in normal play. Still worth buying in the first shuffle, but generally not beyond that.

Ask Your Deck Doctor If Events Are Right For You.

There are eight Events spread across twelve Event cards. When added to the 80 cards in the Core Set and twelve from Crisis Bases and Battleships, the trade deck begins the game with 104 cards. Assuming no events appeared at the start of the game, there are 99 cards left in the deck, 12 of which are Events. This means each card that leaves the trade row (either by being acquired or scrapped) has about a 12% chance of being replaced by an Event. This percentage goes up the longer an Event has not appeared, and goes down once an Event appears.

MATH SHORTCUT TIME: The odds of an Event appearing are (Events Remaining) divided by (Cards In The Trade Row). If you want to be really technical you could keep track of this throughout the game. The shorthand is to start at 12% and add 1% for every six cards that enter the trade row. Once an event appears, subtract a percentage point. The extreme shorthand is to say that there is a 1 in 8 chance that an event shows up.

Generally speaking, events appearing benefit the player who is not in the lead. Most events benefit each player equally, but some of them don’t. When a random effect is introduced into a game that is firmly in one player’s control, that can give the trailing player a chance to come back and win. So, generally, if you are in the lead you should be a bit tighter with your purchases than normal. 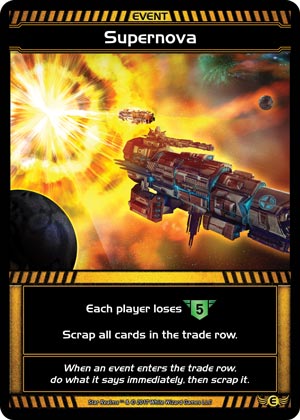 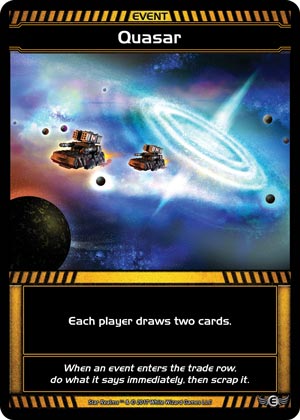 However, there is one key exception to this: If you have a chance to win if a certain event shows up, it might be worth it to go “event shopping.” Warp Jump, Supernova, and Quasar can all give you the little boost you need to win. Those five cards in the deck might be your way to finish it, and depending on your opponent’s comeback potential it might be worth it. (The two Trade Mission cards can be counted in that list too, if you have any card-drawing abilities in your deck.)

Do Not Click The Play All Button. Not Even Once.

You’d think after three years of Events in the app I would manage to not click the damn thing, but no, I still do it. Don’t be like me. Don’t click Play All. Just don’t. If you do, an Event will show up that will require discards or give you scrapping options and you will miss out.

This is a fast format. If you want to collect those seasonal stars, this is a great week to attack the Arena. Good luck, and may you never find a Black Hole with an empty hand. 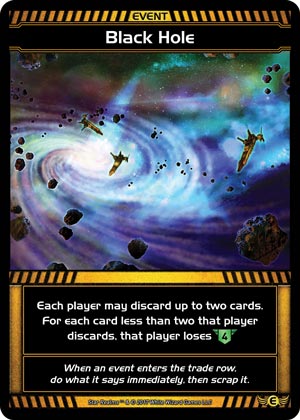