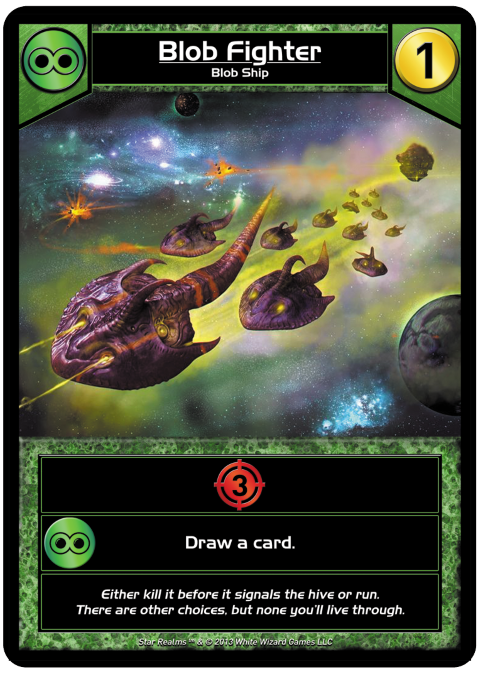 Hey gang, Vito Gesualdi here and I am super excited to report that I’ve finally received my own copy of Star Realms! I’ve had a test printing to play around with for a few months now, but the actual cards are a million times more beautiful, and as the game’s graphic designer I am supremely happy with how they look. And judging by some of your reactions on Facebook and Twitter, you’re loving these cards as well.

This week, we’re finally taking a look at the game’s most feared faction: The Blob. A dreaded race of intergalactic invaders, the motives of these incredibly vicious lifeforms is up for debate (learn more on the Star Realms faction page!). All that we really know about the Blob is that they are extremely hostile, which is why they’re the most combat-focused faction in the game. Blob Fighter is a perfect example of the Blob’s tendency towards violence, and in my opinion its the most powerful 1-Cost ship in the game. This cheap ship packs an incredible 3 Combat, showing just how quickly the Blob player can start racking up damage. My friend Jon recently received his copy of the game, asking “how on earth do you beat the ‘Blob Rush’ deck?” Let me tell you, it can be done (grab those cheap bases my friends), though with the Blob player snapping up every one of these Fighters they see, it can be quite the challenge.

Though the Empire’s Imperial Fighter offers a bit more fighting power when active (4 Combat and a discard), the Blob Fighter’s cantrip ability is what makes it so much sexier in my eyes. Being able to deal out 3 damage while digging into your other powerful Blob cards is what can give green decks the edge, piling on damage too quickly for the opponent to catch up. Though I wouldn’t recommend this guy to a non-Blob player, if you’re feeling green grab as many of these as you can. Battle Pod is another cheap heavy-hitter, with an ability which sometimes confuses new players to the game. What this does is deny your opponents the chance to purchase cards which you know would greatly enhance their deck. If you see your opponent loading up on Federation cards, use Battle Pod to snipe that Defense Center before it gets off the production line. If they are desperately in need of some outposts to protect against your onslaught, make sure that Battle Station returns to the scrap heap.

Though this doesn’t always work out perfectly (sometimes there’s an even better card for your opponent under the one you scrapped!), this ability also lets you scrap a card you’re uninterested in purchasing and see whether another solid Blob card hits the Trade Row to replace it. It can feel pretty great when you both snipe the ship your opponent is eyeing, while revealing another Blob Fighter or Ram for yourself. Again, I prefer to see Battle Pod in green builds (where you can achieve that insane 6 Combat), though if your opponent is heavy on bases, you may find yourself in need of its raw combat potential regardless. Though the Blob typically favor combat over all things, Trade Pod is the obvious exception to the rule, with a trade boost that makes you wonder if it’d feel more at home help filling the Trade Federation’s bank accounts. No other 2-Cost card in the game offers this much trade, making the Pod an obvious pick for players of any faction looking to start spending big.

For the Blob player however, the Pod is an even more delicious buy. Since the Blob are typically bad at generating trade, Trade Pod is one of the few ways to stock one’s deck with some of the more powerful Blob options like Blob Carrier or Mothership. And fitting with the Blob theme, the 2 Combat ally ability continues to pile on damage even during a trip to the market. An incredible card, and my pick for the best 2-Cost ship in the game. If you’re looking for cheap power, definitely consider the Blob!