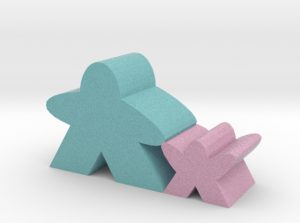 Does your sister slay you with scrap. Is your brother bothersome with Blobs? Do you play with your kids? Your spouse?

We want to hear from you. What does Star Realms mean to you and your home team?

We begin with Liz!

Liz Loikkanen: Our family loves playing board and card games and we’re always on the lookout for games we can play together. We have two children, Thing 1 and Thing 2, who are currently 9 and 7, and we try to host a family game night every Friday. Like so many of our favorite games, we discovered Star Realms through watching Wil Wheaton’s Table Top and quickly became addicted. It started as a fun way to spend our evenings, once the kids had gone to bed, because it required little setup and didn’t take too long to play, but soon they wanted in on the fun too. We began by letting them practice playing alongside us as co-pilots, then playing pass and play on the mobile app. Thing 2 couldn’t read very well when he started playing, but the cards are so well designed, and he loved playing so much, that he managed to memorize what each card could do and even saved up his pocket money to buy the Colony Wars expansion so that we could play two headed Hydra. Now the kids could have their own decks and make their own decisions, but we were still able to support them. We usually play with one child and one adult on each team to keep it fun and fair. Thing 1 has ADHD and often struggles to keep her attention on the game when it isn’t her turn and finds strategy a challenge, so playing two headed Hydra helps to include her in the game but takes off some of the pressure to remain focused.
We each have very different strategies: My husband likes the control of playing a lean, blue deck, but is still flexible about adapting to the trade row; I love an aggressive yellow/green strategy with enough reds to trim my deck down to the bare essentials and I usually play offensively, trying to get in big hits before my opponents can build any defenses; Thing 1 has zero strategy but sometimes gets lucky buying chaotically; Thing 2 loves to ‘buy all the things’, especially things that give him more buying per turn, he builds monster decks, which I would find unwieldy to play, but the frustrating thing is that he often beats us to smithereens. I really love the way that the Star Realms mechanic allows for so many different playing styles and encourages the kids to hone and develop their own individual strategies.

We bought the United and Scenarios boosters for my husband as a Christmas present and finally got around to sleeving and including them in our gameplay during the Easter weekend. We played a three-person game with Thing 2; shuffled the Assault, Heroes and Command cards into the trade deck; dealt out three missions each and drew a Scenario. The Scenario was Ready Reserves, which lets you hold onto cards instead of playing them all during you turn. I made the mistake of completing my first two missions in quick succession towards the start of the game, which put a huge target on my back. I was down to the last of my Authority and just needed to pull the right draw to finish my final mission, but I didn’t get lucky and I was annihilated by Thing 2 and my loving husband. Thing 2 and the husband traded blows for a few rounds, with Thing 2 ignoring his missions in favor of sticking to his usual strategy and the husband completing two out of three missions. With just a few Authority remaining, Thing 2 wiped out the husband with a devastating final barrage. It was fun to add so many new layers to the game, but it will take a while to work out the best strategy for completing missions and how to most efficiently utilize the Scenario. We can’t wait for our Kickstarter goodies to arrive and Thing 2 runs to the post box every day after school to check. The box recommends the game for ages 12+, but if you have younger kids who are smart, keen and thirst for the blood of their enemies, we say go for it.

Liz Loikkanen is British blogger, freelance writer and fledgling conrunner stranded in the Finnish wilderness. She blogs at: scalingbookmountain@blogspot.fi and is currently volunteering as Area Head of Literature Programme for Dublin Worldcon 2019. If you are interested in volunteering, being a programme participant or suggesting programme items for Dublin Worldcon please fill out the forms at: https://dublin2019.com/