Due to the cost of the air shipment, these will be more expensive than the suggested retail price. For those that pre-ordered via the Epic Card Game Kickstarter, yours will be shipped out over the next two weeks at no extra cost. You will receive a ship confirmation email from ShipNaked when your product has shipped. 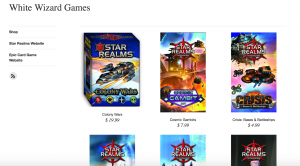 Colony Wars is a stand-alone expansion for the hit Star Realms deckbuilding game. The newly-discovered outer worlds, with their rich, untapped resources, are tempting targets for those seeking to expand their power. Now, the scramble for control of these unclaimed territories begins. Designed by Hall of Famers Rob Dougherty and Darwin Kastle, Colony Wars can be played as a stand-alone 2 player game or combined with the original Star Realms Deckbuilding Game to support an additional 1-2 players. This box contains a complete 2 player game with rules and 128 cards, including an all new 80 card track deck.

Note: We paid a premium airshipping cost to offer Colony Wars in time for the holidays, and are selling it at a premium price of $19.99. This set will be widely available  at your local game stores around February 2016, at a recommended selling price of $14.99.

Cosmic Gambits is a new 15 card expansion for Star Realms. In the cold, unforgiving battlefield of space, a cunning Gambit can prove to be the most powerful weapon in your arsenal. This pack contains 15 cards for use with the Star Realms Deckbuilding Game and/or the Colony Wars expansion.

Gambit cards are dealt face down to players at the beginning of the game. You choose each number of Gambits every player will get, or you can give fewer Gambit cards to some players as a handicap. The extra (unclaimed) cards are set aside outside of the gam in a face down pile. Players keep their Gambit cards face down in front of them until they choose to reveal them. Gambit cards never go into the trade deck, your hand, or your personal deck. They have silver borders to make it easier to keep them separate from your other cards. Players may reveal Gambits at the start of the game or during their main phase. To reveal a Gambit, turn it face up. When a Gambit is revealed, you get powerful one-time or continuous abilities that can help lead you to victory.

Note: We paid a premium airshipping cost to offer Cosmic Gambits in time for the holidays, selling at a premium price of $7.99. This set will be widely available at your local game stores around February 2016, at a recommended selling price of $5.99.

We will also do everything we can to get these games into retail distribution as quickly as possible, and encourage you to support your local game stores. Remember, these games will be available at normal retail pricing around February 2016.