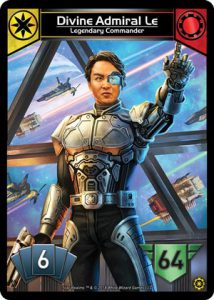 Commander Le forced himself to stay calm as his battle barge settled into the docking bay of the massive Cult superstation.  Few Imperial officers had ever boarded a Brain World, especially by invitation. While the path ahead was fraught with risk, Le reminded himself that the accompanying opportunities would make it worthwhile. He thanked the barge pilot and prepared to disembark.

Le’s research had failed to prepare him for what awaited him in the dock. As he descended the barge’s landing ramp the air buzzed with a constant low hum as assorted drones filled the air of the dock, moving this way and that, while executing various tasks. What held his attention though was the man waiting to greet him.

Perhaps man wasn’t the best word for the being. Its face reminded Le of an engineer he knew back on the cruiser he’d recently transferred from. It had a full, rather shaggy reddish beard and wore some sort of protective optics over its eyes. That’s were his resemblance to a human being ended though.

Its body was that of a multilegged battle robot or perhaps a robot designed for heavy duty repair work. The man-machine walked upright on four massive mechanical legs and one of his two arms ended in a three-fingered claw with some sort of laser weapon or welding tool protruding from the middle of it.

The cyborg seemed not to notice Le’s amazement. “Welcome to Brain World Gamma. I am Chancellor Hartman. I will be your escort for the journey ahead of you. Please follow me.” With that, it pivoted on its machine base and started walked away like some sort of large mechanical spider.

Le’s concern for entering a Cult base without an escort of Imperial guards was quickly overwhelmed by the wonder of his surroundings. Thanks to the rapidly moving drones and other automated machinery, there was an atmosphere of constant activity and hurried work being done, but Hartman appeared to be the only “human” in the docking area besides Le himself.

They left the docking area via a corridor wide enough for multiple imperial troopers abreast, or in this case, precisely the right size for Hartman’s bulk to move through without difficulty. At the end of the corridor, a large doorway slid open to allow them to enter a large chamber with what appeared to be some sort of throne in the middle.

“The Emperor must think highly of you to select you for this honor.” Hartman’s head swiveled on his torso to face Le in a maneuver inhuman enough to cause Le further discomfort, despite thinking that he couldn’t get anymore uncomfortable with the situation.

“I am the Emperor’s servant and I’m ready to do what he requires.” Hartman looked at Le intently before replying, “Once your ascension to Divine Admiral is complete you will serve two masters: The Emperor and the Machine.” It paused, but when Le offered no reply it continued, “This is the only way to achieve the alignment that your emperor desires.”

When Le just nodded Hartman gestured towards the high tech looking throne, “please be seated.” Le did as asked and some sort of helmet lowered from the ceiling with a soft whir and settled over his head, blocking his vision.

“How do you feel Divine Admiral?” Le blinked to clear his vision as he regained consciousness. At first, he found himself unable to respond as his brain tried to adapt to the massive flow of data it was receiving. After a few moments that felt much longer, he was able to clear his throat and respond. “I feel… clarity… Let us begin the Alignment.”