We are excited to announce a new version of the Star Realms app that adds real-time gameplay, the full Colony Wars expansion and a sleek new look.

The newly-discovered outer worlds, with their rich, untapped resources, are tempting targets for those seeking to expand their power. Now, the scramble for control of these unclaimed territories begins. Will you outwit your opponents and claim your victory in the Colony Wars? This is the time that history records as the Colony Wars. Claim your riches. Establish your power. Rule the Realms!

So what is coming in this new release? The new Star Realms app: a sleek new look & feel, real-time games, and easier to play for novice players! And the full Colony Wars expansion with 43 all-new cards!

The old interface served us well, but equipment must be upgraded if you’re going to explore the new frontier. We took feedback from all corners of the world, and our Digital Team built something pretty amazing. You’ll notice a cool rotating starfield. This can be turned off in the option screen if you’re so inclined. There’s also new music! We kept the old tune in there, but there are 5 more pieces in the rotation. 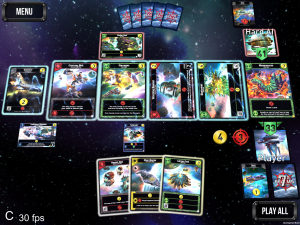 This is not your Grandmother’s Star Realms.

But it’s not all “new content” and “new look”. We also took the opportunity to tweak the app and make some changes. We want you to have fun exploring the new Star Realms app, but here are a couple of teasers:

With opponent discard effects still taking place when their turn starts, the previous version of Star Realms didn’t have a visual cue for the number of pending discards. Now it does! This quality-of-life change was a long time coming. 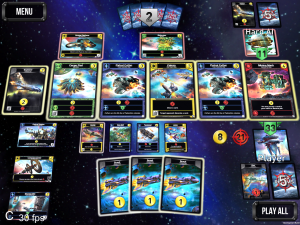 The arrow on the opponent’s hand of cards says he’s going to be discarding two cards next turn. The 21 combat says he won’t even live that long.

Another change that should help newer players, as well as help experienced players learn new cards faster, a single tap or click to zoom will replace the long press that we had in previous versions. If you are asked to select a card, you will still have to long press a card to zoom in on it (to keep selecting cards easy as well), but in all other cases – just tap a card to read it! 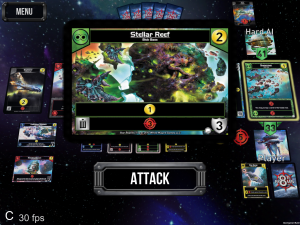 While 3 minute games did their job (having people play out a game in one sitting), we felt like they could improve in certain areas. Mostly, we wanted to decrease the time available per turn, while increasing the time during longer turns. We also wanted to make double queueing unattractive, to have as little downtime as possible for both players.  Realtime games in Star Realms will work as follows:

Every turn, you start with 45 seconds on your clock (displayed in the top left of your screen), plus half the time you had left from last turn (with a minimum of 15 seconds, and a maximum of 45). This means you always have between 60 and 90 seconds to take your turn, and you get rewarded a bit if you play faster.

On top of the starting clock, you also get a few seconds for every move you make, including discarding cards, activating bases, resolving events, etc. This way, if you need to make a lot of moves because you have a draw heavy deck, or a lot of events popped up, you won’t time out as long as you keep making moves.

The moves will also be displayed in real time to your opponent, so your replay won’t be using their clock time. This also makes the games feel much more “real”, and makes it way more fun to stay in the one game. The new realtime games also require you to finish your game, or concede. You cannot play multiple realtime games at the same time, but unlike with 3 minute games, you probably won’t want to either. 48 Hour games will also display moves as players make them, but without the pressure of a short timer.

EASIER TO PLAY FOR NOVICE PLAYERS

We also made the Easy AI Level easier based on feedback from novice players. Haven’t been able to beat it? Give it another try!

You’ll also gain access to two new chapters in the ongoing campaign, each with six missions! The story will allow the player to fill the shoes of real-life winners of the Star Realms Legend Series as they explore the Morgana System. The introduction to the story, Crisis Averted, can be found here.

The new Star Realms app update is free (this does not include Colony Wars). The Colony Wars expansion is available for $4.99, purchasable through the app like any expansion. If you have any issues with installation or during play, please email support@wisewizardgames.com at any time!