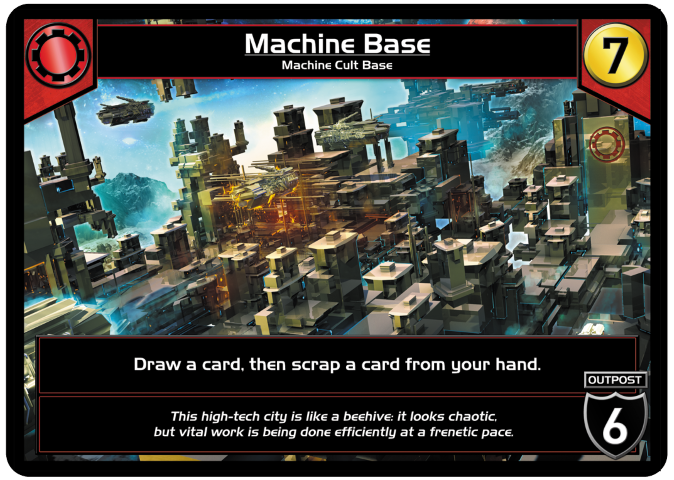 Hey everybody, it’s time for more Machine Cult goodness, this time with a roundup of three awesome bases. The Machine Cult is definitely a defensive clan, so wary of interacting with non-believers that they’ve established outposts around the galaxy to ward off intruders into their realm. In fact, the Machine Cult is the only faction in the game which does not have a single non-outpost base. What a bunch of hermits! Battle Station is interesting, as it has no real abilities aside from being able to scrap itself for a hefty 5 Combat. Don’t think that makes it weak however, as this Outpost is a fantastic defensive option, no other base in the game offering this much protection for just 3 Trade.

In the early game, your opponents will often be hard pressed to find 5 Combat, letting you sit behind the Station’s outpost barrier while continuing to trim the fat from your deck with Trade Bots and Supply Bots, all while chipping away at the opponent’s defenses with their respectable Combat-granting ally abilities. Late game however, the Station’s self destruct mechanism makes a perfect way to blast a hole in the opponent’s own Outposts and let your cluster of ships swarm in for the kill. Definitely a recommended early buy for the Machine Cult player, so look for some bots to help it out! Junkyard may seem expensive to those who have yet to experience the incredible power of scrapping a card every turn. However, if you can protect this floating pile of scrap, you’ll soon find yourself with a deck tinkered to perfection by Machine Cult engineers. As discussed, the more Vipers and Scouts you can remove from your deck, the more chance you have of drawing your powerhouses.

Though Junkyard can likely fit into any faction strategy, when combined with the scrapping power of the Machine Cult’s bots, your deck’s power levels can often shoot through the roof. Again, grab the Machine Cult’s trade generating robots and save up for this guy… or perhaps its big brother: As good as Junkyard is, it pales in comparison to the mighty Machine Base. For 1 Trade more, not only do you get an additional point of Defense, but you’ve added a card draw engine to your scrapping party! Yes, you now have to scrap from your hand, but with an extra card in hand you’ll most likely have a Scout or Viper ready for the junk pile. And as the game progresses, so increases the likelihood that the Machine Base will be drawing you into heavy-hitters like Battle Mech and Missile Mech.

This outpost is another option which is perfect for all players, so don’t let it slip into your opponent’s hands unless you know you can take it out. A few turns of its card draw / scrapping combo will quickly give your opponent an advantage which can be impossible to overcome. 7 Trade may seem like a lot, but if you’ve got the money to burn, consider investing in the tech sector!