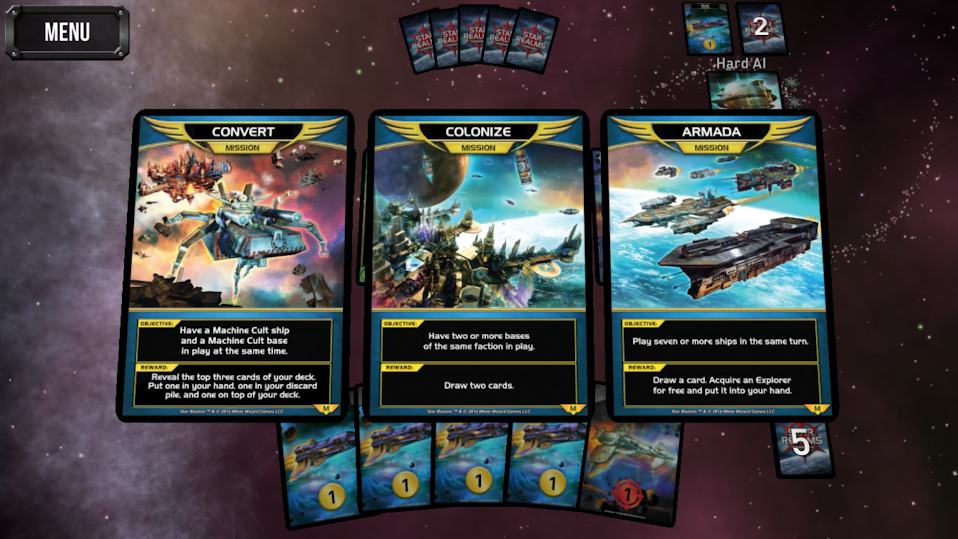 Would you take on a dangerous mission for the glory of your star realm?

Because now you can, in the Star Realms digital app. Star Realms United: Missions releases today!

The new app content gives you a new way to play Star Realms. You can use Missions in your head-to-head games, or play the new chapter in the United story in the campaign mode. Play 6 new missions including a new Boss Mission.

You can get it for Apple, Android, and Steam. So all the stars are aligned for you to download it today.

Missions are an all-new card type that give players an alternate win condition. Each player receives three missions at the start of the game, which are hidden from their opponent. When a player fulfills the objective, they reveal the mission and score the reward. When they score their third and final mission, they win the game!

Don’t have the digital app yet? You can get it on the App Store, Google Play, or Steam for $4.99 and start playing today. You can always find an opponent, there are tons of opportunities to win prizes, and we put out new Arenas regularly (where we modify an existing rule or add a new one, and players keep playing until they’ve won 6 games or lost 2).

If you need help with the digital app, contact us at support@wisewizardgames.com.

So download Star Realms, get Missions, and discover all-new strategies for victory!