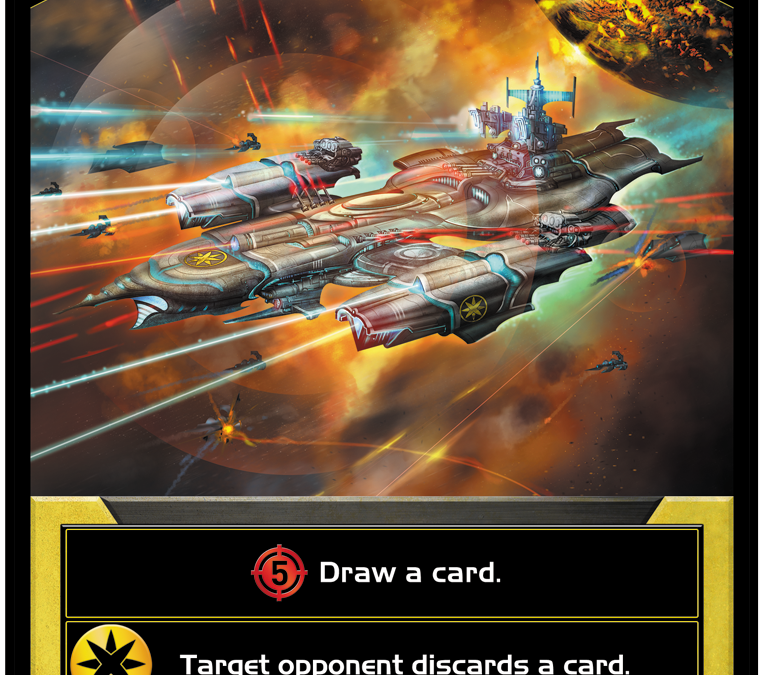 Hey guys, Vito Gesualdi here with more Star Realms spoilers! You all voted on which faction you wanted to see spoiled first, and the answer was the Star Empire. So, this week I’ll be taking a look at some of my favorite Star Empire cards, and giving my analysis about how to best utilize them to dominate your upcoming Star Realms match-ups.

The brutal Star Empire is a very interesting clan, a collection of colonies who famously rebelled against the overreaching control of  the powerful Trade Federation to form their own independent empire (learn more on the Star Realms faction page). Fitting with this theme of rebellion are the Empire’s various disruptive abilities, currently the only faction which can force opponents to discard cards, as seen on one of their powerful flagships: Battlecruiser. As the game’s graphic designer, Battlecruiser holds a special place in my heart, because it was actually the first Star Realms card ever designed! Since Battlecruiser has more text than any other ship in the game, we needed a card template which would have the room to accommodate its three different abilities. This involved plenty of argument between the design team about the best way to accomplish this (at one point we were actually considering a completely textless game, ala Race for the Galaxy) but in the end I think we’re all very happy with how the cards look!

The Evolution of Battlecruiser

Design aside, Battlecruiser is notable for belonging to the 6+ Trade Club. Since Star Realms gives players five-card hands, the most expensive cards you can purchase early on are those costing 5 Trade (which would require a hand of 5 Scouts). You won’t be able to afford cards like Battlecruiser until adding a few Explorers (or other trade-generating cards) to your deck, and these powerful high-cost cards can definitely pave the path to victory!

To start, we have Battlecruiser’s main ability, which grants both 5 Combat and a card draw. Magic players refer to this kind of ability as a “cantrip,” and cantrips are insanely powerful in Star Realms, as there is no cost to put a card into play. Basically, there’s never a downside to drawing Battlecruiser, as it always draws you another card from your deck, giving you the five-card hand you would’ve normally had (with that extra 5 Combat on top!). Very, very sexy.

But it doesn’t stop there. Battlecruiser’s ally ability is very powerful as well, forcing the opponent to discard a card. Making your opponent toss a Viper or Scout in the bin might not seem too powerful, but the tight balance of the game can sometimes mean that the loss of that 1 Trade will stop your opponent from buying the powerful card they need, while the loss of 1 Combat might prevent them from taking out one of your beloved bases. Combined with some of the other Empire cards which force a discard, you can sometimes leave your opponent with just 2 or 3 cards in their hand, putting them way behind on their next turn. As ally abilities only trigger when you control another card of the same faction, look to pick up Empire staples like the cantripping Corvette and Survey Ship, or bases like Recycling Station and War World.

Lastly there’s Battlecruiser’s scrap ability, and though it can be hard to part with such a powerful beast of a ship, self-destructing the cruiser feels so good. For those of you paying attention, the turn you scrap Battlecruiser you’ll be getting 5 Combat, two card draws, and a free base destruction! I’ve personally seen this ability act as the finishing blow in many Star Realms matches, and if your opponent has a Battlecruiser in their deck, prepare yourself for an oncoming swath of destruction.

In short, Battlecruiser is a very powerful addition to any deck, with its cantrip ability making it so the ship even fits into decks focused on a different faction strategy. Of course, it works best in a Star Empire-focused deck, especially one which prioritizes wrecking the opponent’s hand with multiple discards. As the cruiser doesn’t generate any trade, you may wish to hold off on purchasing until you’re ready to focus less on buying additional toys and focus more on smashing faces, but if you’re looking for a solid mid-game option which can also act as a finisher, grab this beastly ship pronto!