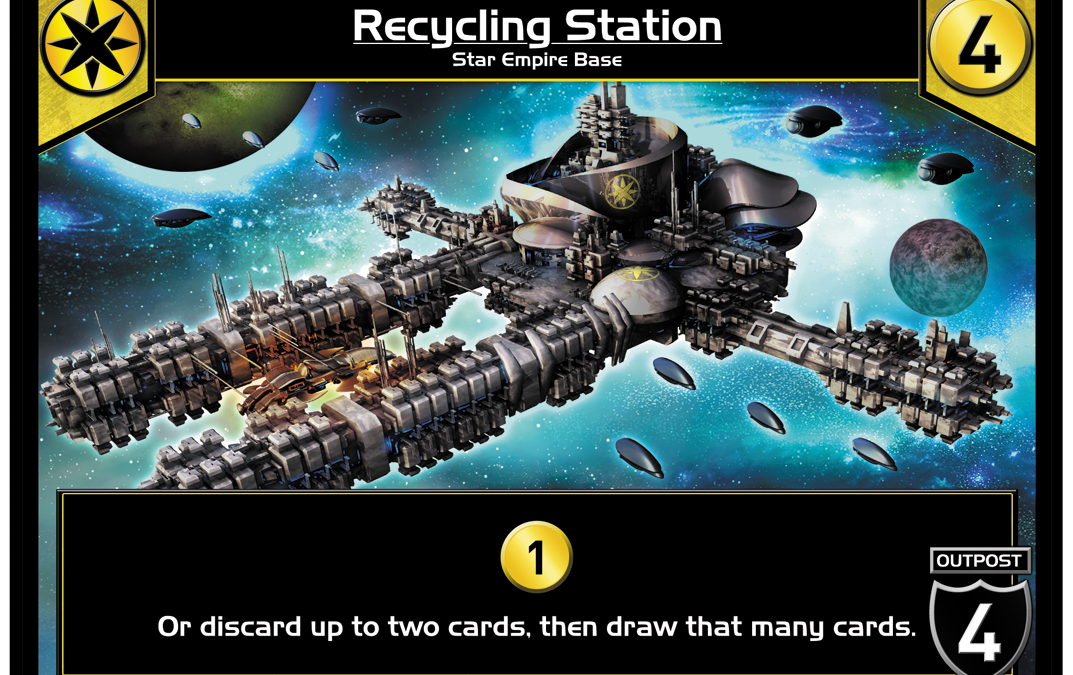 Today we’re taking a look at an varied mix of Star Empire cards, all of which have the potential to lead your deck in some very exciting directions! 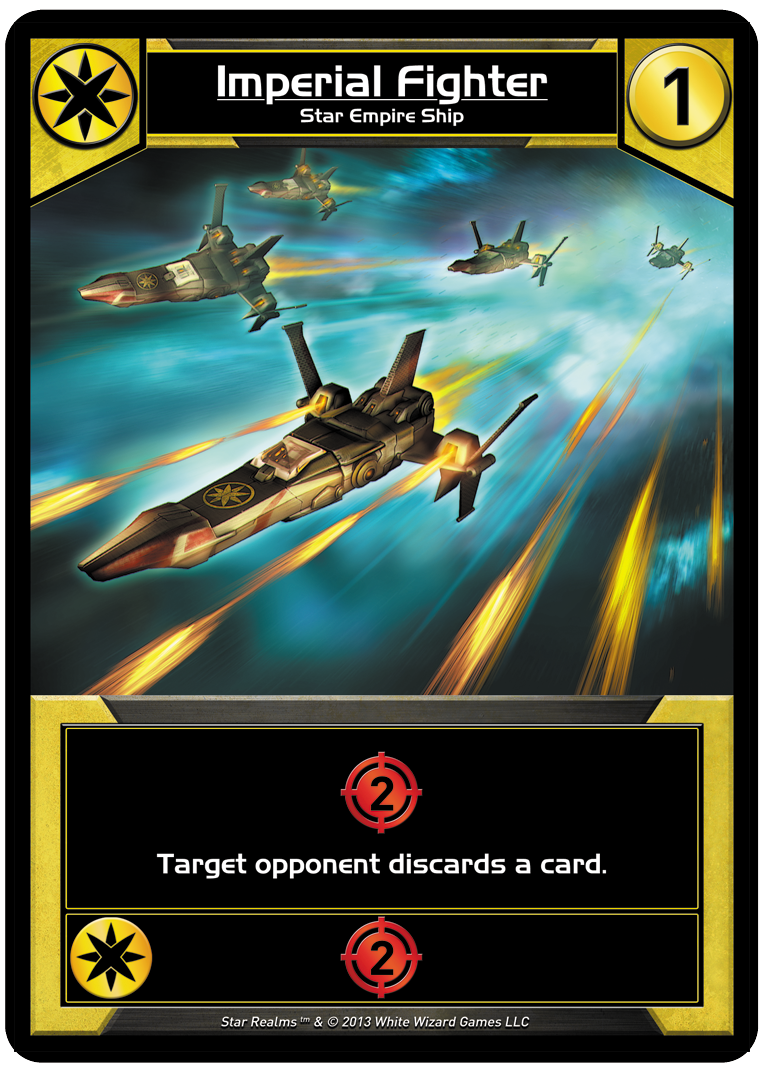 In the base game, all factions have a 1-Cost ship available, which helps to define the core strategy of that faction. The Star Empire is a combat-oriented faction which makes up for what they lack in raw individual power with a strength in numbers approach. As with Imperial Fighter, almost all of the Empire’s ally abilities add Combat, making this a clan which can quickly swarm in and deliver a crushing blow from out of nowhere, while also laying waste to the opponent’s hand. Imperial Fighter actually promises more Combat than any other 1-Cost ship in the game, and is a surefire way to start punching through your opponent’s authority. 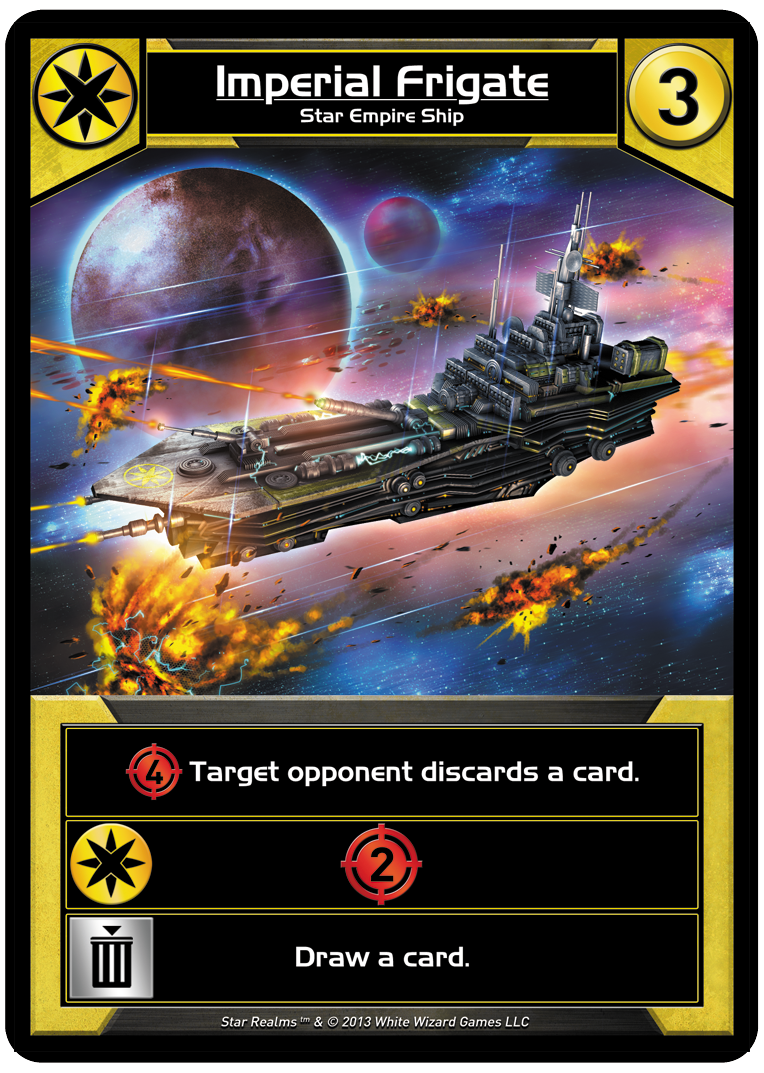 To back up your Imperial Fighter, look no further than his big brother: Imperial Frigate. Though not as cheap as the little fighter, this 3-Cost ship is still very affordable, and its primary ability actually mimics an ally-triggered Imperial Fighter perfectly (4 Combat, discard a card). Obviously this card works perfectly in tandem with its underling, helping to strip multiple cards from an opponent’s hand and leave them with few options on their next turn, while triggering those Combat boosts for massive damage. And while it can be hard to scrap such a respectable beater, sometimes the Frigate will dig you into that extra boost of Trade you need to snag a Star Empire powerhouse like Dreadnaught, or the Combat you need to finish off a base. Definitely an excellent option, especially if you’re going the discard route! 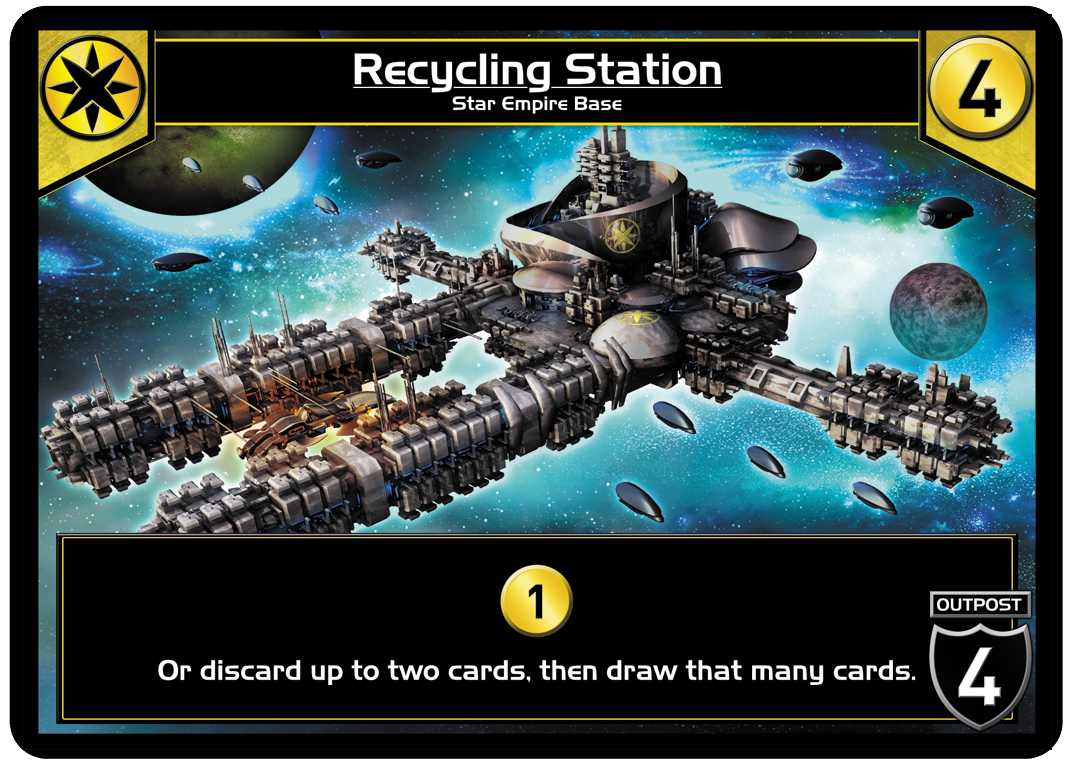 Lastly we see Recycling Station, which is actually somewhat of an oddity, as its the only Star Empire base without a combat ability. That being said, this filtering powerhouse is a great option for almost any deck, though is a particularly huge boon to the Empire. Even with a wealth of Empire cards in your deck, there’s still going to be those sad hands packed with the basic Scouts and Vipers. Since the Star Empire gains their power from working together, being able to toss away your unaligned cards and go digging for more friends is the perfect way to generate a huge turn, and you’ll rarely find yourself opting for the 1 Trade once you’ve got a wealth of Corvettes, Imperial Fighters, Imperial Frigates and other ships to go find. With such a powerful filtering ability, you can be sure that your opponents will be gunning for Recycling Station as soon as they can, so try to load up on the Empire’s other outposts and see if you can’t give them something else to fire at!