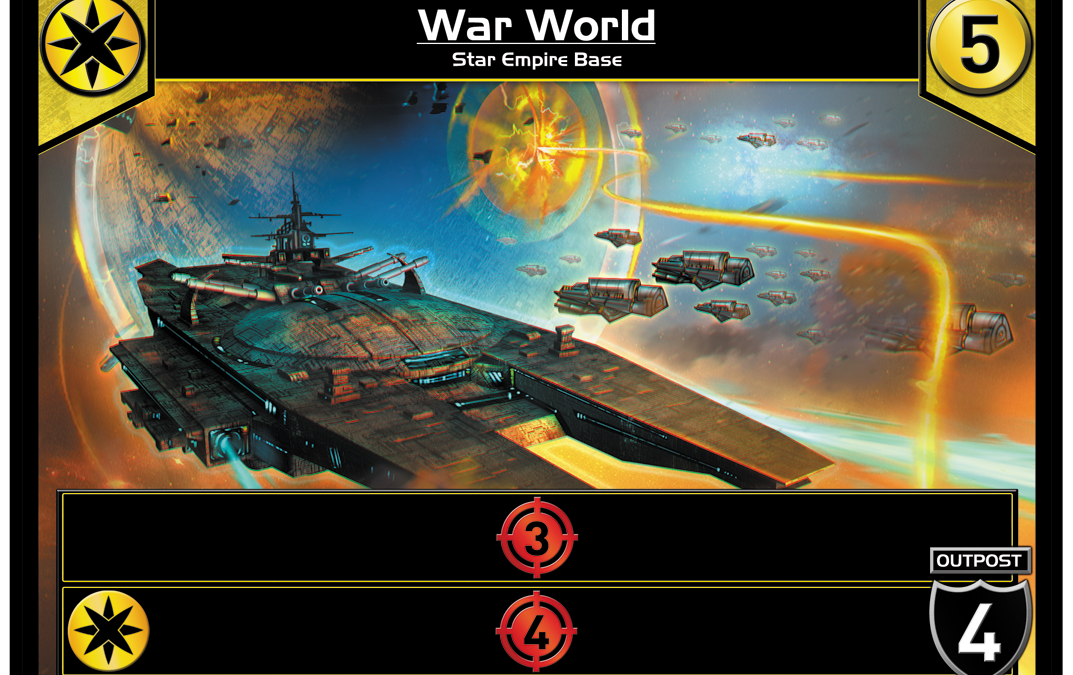 So fare we’ve taken a look at the Star Empire ships, but haven’t yet seen any bases. Let’s change that today by going through a trio of them!

As we saw yesterday, the Star Empire is very good at cycling through its deck, with cantripping cards like Survey Ship and Corvette. As discussed though, those cards are at their best once they are either:

On that second point, the Star Empire’s bases tend to feature some very powerful ally abilities, rewarding players who invest in the aforementioned cheap cantrips. Gaining 1 Combat off a Corvette doesn’t feel like much, but with a Space Station already in play… Wowza. Now your Corvette’s ally ability triggers, netting you another 2 Combat, while the Space Station triggers as well, giving you another 2 Combat as well. That’s a combined 7 Combat and because of the cantrip ability, you’ve still got 5 cards in hand! This is shaping up to be one big turn. Space Station is definitely an early buy for the Star Empire player, as the 4 Trade cost can usually be afforded with one of your opening hands, immediately getting that 2 Combat per turn threat into play. Its also very hard for players to summon up 4 Combat in the early game,  so an early Space Station purchase can quickly rack up some heavy damage before your opponent purchases a combat-ready fleet. And since Outposts act as a shield to protect you and your non-outpost bases from being attacked, Space Station remains highly relevant even in the late stages of the game. Of course, don’t be afraid to trash this guy and upgrade to an 8-Cost monster like Fleet HQ should the opportunity arise! Of course, if you really want to super-size your damage potential, look no further than War World! If you manage to pull a 5 Scout hand in the early game, definitely consider this destructive planet of doom. With 4 Defense its just as resilient as Space Station, but the 3 Combat ability racks up the damage even faster. And if you’re able to fill out your deck with a sizable number of additional Star Empire ships and bases, you’ll be triggering that insane 4 Combat ally ability as well! I’ve found that when a Star Empire player gets a sizable collection of Outposts in play, opponents sometimes can’t find any way to sneak damage through! Meanwhile, those Combat abilities ensure that your opponent’s bases are little more than cannon fodder, with bases like War World letting you rip through the opposing players defenses turn after turn. Then there’s Royal Redoubt, the top-end of these midrange bases, featuring what I think is the greatest weapon in the Star Empire’s arsenal. Again we have that 3 Combat ability, now along with a hefty 6 Defense. However its the “target opponent discards a card” clause which really excites. Remember what I said about how hard it can be to punch through a Star Empire player’s stack of Outposts? Its made even harder after you’ve been forced to discard half your hand! A good Star Empire strategy is often about taking the opponent’s options away, while holing up behind an ever-growing stack of bases, and Royal Redoubt is the perfect accessory to that strategy!