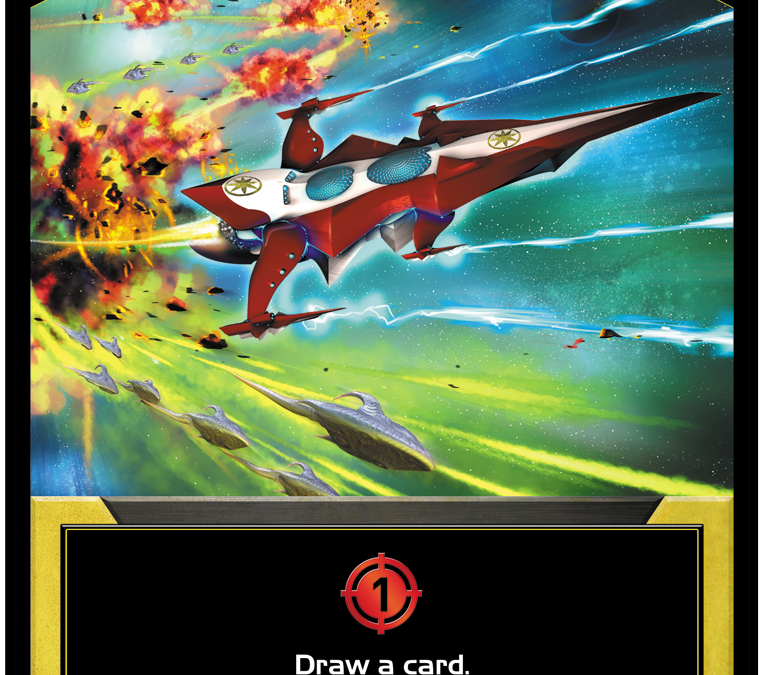 Continuing with our look at the Star Empire, I want to spotlight two of the clan’s smaller ships: Survey Ship & Corvette. For those of you who aren’t familiar with cantrips (covered in my preview of Battlecruiser), these cards may look somewhat weak. After all, they only add 1 Trade or 1 Combat, which is the same thing your basic Scouts and Vipers already do! However its that “draw a card” clause which makes these cards so much better than expected, giving you that little trade/combat bonus and immediately replacing themselves with a new card in your hand. Though many of the more expensive Star Realms ships have a cantrip built-in, Star Empire is the only faction to feature this kind of low-cost card draw, with the boys in yellow sometimes digging through an extra 2-3 cards each turn! It’s also worth noting that the quicker you draw through your deck, the sooner your new purchases get shuffled in, and Star Empire is great at finding their new toys before any other faction.

Truthfully though, it can be hard for these little guys to stand up against some of the other 2 or 3-cost options unless you know how to build around them properly. For instance, in the early game your 3-Cost Survey Ship is usually going to draw you into a Scout, netting you a total of 2 Trade. At that point you might have been better off buying an Explorer, which nets the same 2 Trade but would’ve only cost 2! Similarly, Corvette’s 1 Combat is very weak in the early game, but becomes fantastic once you have other Star Empire cards to dig into and trigger all your ally abilities. A definite way to take advantage of these ship’s card filtering abilities is to pick up powerful Star Empire bases like Space Station and War World, activating their Combat bonuses each turn and quickly laying waste to your opponent. Or, snag a few of the Machine Cult’s scrap cards, which let you exile the chaff from your deck so you only draw your sweet delicious space wheat.

Again though, all cantrip cards will fit in any deck, and I often purchase these guys once my deck is fat with goodies, even when I’m heavily invested in another faction. Keep an eye out for these quick and dirty ships in your next game!