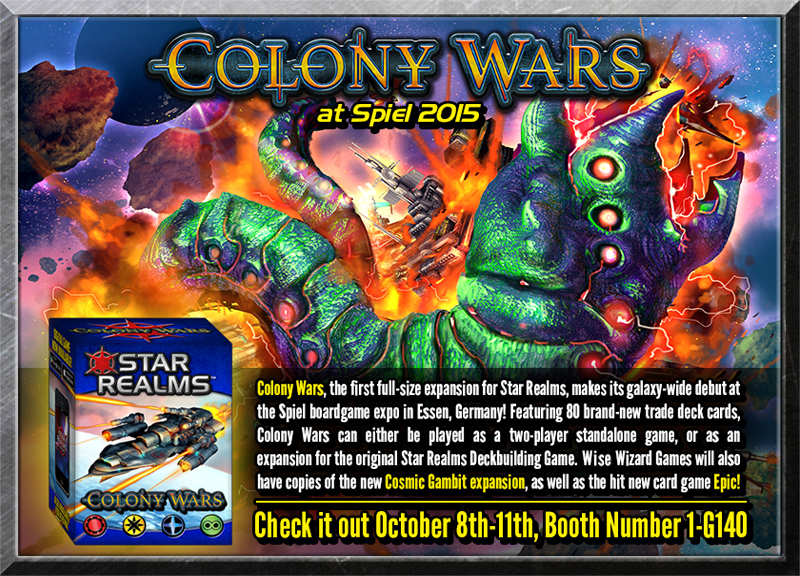 We have exciting Star Realms news for Spiel attendees. Colony Wars, the first full-size expansion to Star Realms, is making its grand debut at Spiel in Essen Germany, October 8 to 11th, at Europe’s largest gaming convention!  For the first time ever, we will have the new Colony Wars box set and the Cosmic Gambit expansion for Star Realms available for sale.

Colony Wars is a new full box set of Star Realms, with an all new 80 card trade deck. Colony Wars plays on its own as a complete 2 player game or it can be combined with the base Star Realms set for a 4 player game. We expect Colony Wars to be available in stores in the November timeframe.

Our partner, Blackfire, will also have German versions of our Star Realms base set, Crisis expansions, and the Gambit Set at their booth.

Epic Card Game also makes its European debut in at Spiel in Essen. Epic Card Game has been a huge success on Kickstarter raising almost $600k from nearly 12,000 backers. Epic Card Game is a fantasy strategy card game of mythic battles. Two to four players can play sealed, draft, or constructed out of one small box. If you didn’t get a chance to back the Kickstarter or want more tips on how to play Epic Card Game, stop by and say hello!

Wise Wizard Games will be demoing Colony Wars, Star Realms, and Epic Card Game, and we will have these plus Star Realms Cosmic Gambit expansions and playmats for sale at Booth 1-G140 (Hall 1). CEO and Game Designer Rob Dougherty will be there, along with many others from Wise Wizard Games. We hope to see you there!

EDIT: Sadly enough, our promo cards were not delivered in Essen, so we regrettably won’t have promo cards at Spiel.