Many of you have been asking for some spoilers from the upcoming Star Realms High Alert set. This set was part of the Epic Jungle Kickstarter, and is available for preorder on our online store and will be available in local game stores down the road. Here you go: 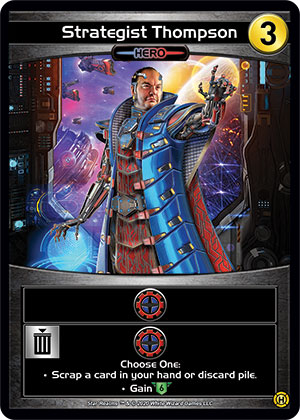 With High Alert we are introducing heroes that belong to more than one faction. In the case of Strategist Thompson, he is a member of the Coalition, which is a faction featuring cooperation between the Machine Cult and the Trade Federation. When the Strategist comes into play, it triggers both your Cult ally abilities and your Federation abilities. When you scrap the Strategist, it triggers both Cult and Federation ally abilities again.

When you scrap Strategist Thompson, you also get to make a choice between scrapping a card in your hand/discard pile or gaining 6 authority. This has a nice flexibility, because scrapping can be quite powerful early in a game and 6 authority can be a tide turner in the late game. Whether your deck likes the Coalition or your opponent’s deck does, you’ll want to pick up this hero before the game gets too close to the end. 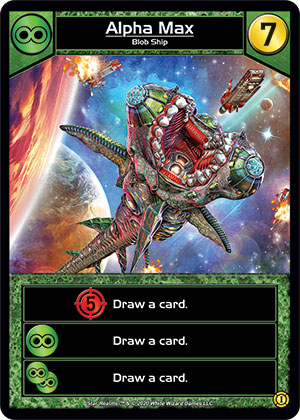 A mechanic we’re featuring heavily in High Alert is the double ally ability that we introduced in Frontiers. Starting with 5 combat and draw a card, Alpha Max is always a good card to draw, but each ally ability you get to trigger makes it that much more exciting. Drawing one card is good, drawing two cards is a rare and powerful thing, but drawing three cards all from a single card is something you almost never see in Star Realms. Like Blob World, if you get this bad ass card, I recommend grabbing every Blob card you see afterwards. 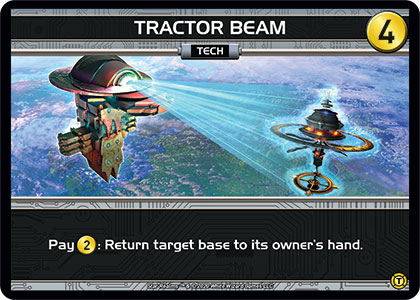 In High Alert we introduce a new card type: Tech. Tech cards are added to the trade deck and can be acquired by paying their cost, much like ships, bases, and heroes. When you acquire new tech, the card gets put directly into play, much like a hero card. When you have tech in play, once per turn you may pay the cost to activate them.

Tractor Beam is one of the more expensive pieces of new tech. It costs 4 to acquire and 2 more trade to use. Because there needs to be a base in play, it’s ability won’t always be useful. But if there are bases in play it can end up being quite powerful, much like a Mega Mech or a Battle Barge that you have the option of using every turn. Using a base like Central Office or Brain World a second time in the same turn can be game breaking. Getting an enemy outpost off the board at just the right time can be game ending.

As an added bonus, here is a spoiler from the Kickstarter Exclusive First Strike Promo Pack: 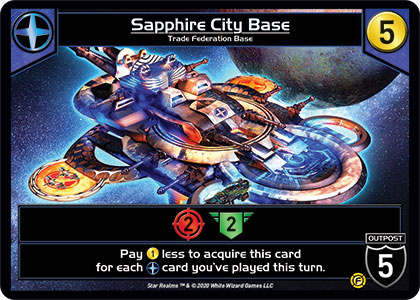 In many ways it’s similar to Defense Center. They are both Trade Federation Outposts that cost five and they are both combat/authority gain cards. The biggest difference is that Sapphire City Base costs less than five if you’ve played any Federation cards. The concept of having cards cost less when you’ve played cards of that faction is a new mechanic that we’re featuring in High Alert.

As a result of this ability, if your opponent has been adding Federation cards to their deck, then you might want to make acquiring Sapphire City a higher priority, so that your opponent doesn’t get to acquire it cheaply.

The name for this base was inspired by the real life Sapphire City Game Parlor in North Canton, Ohio! 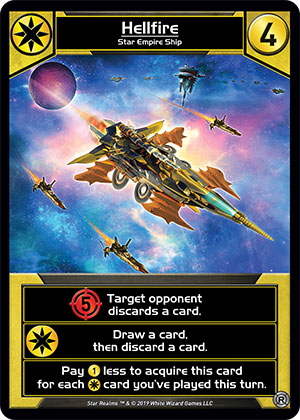 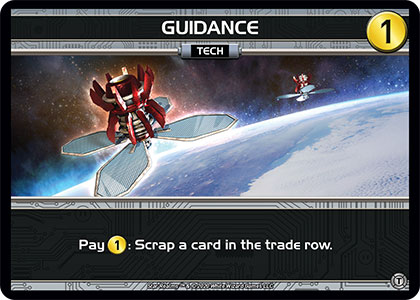