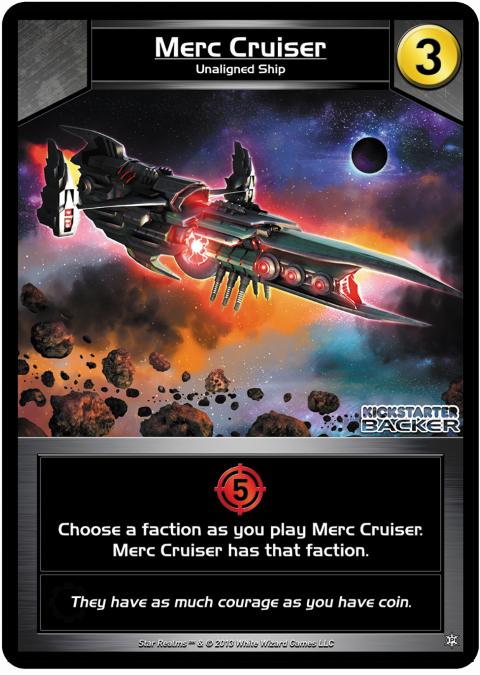 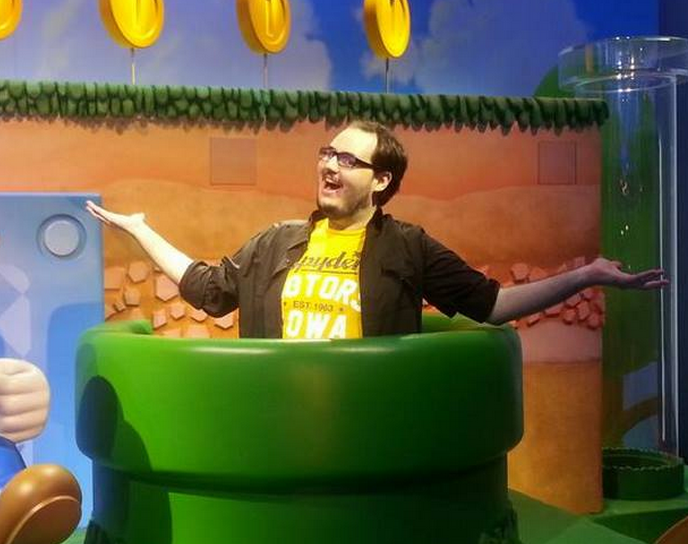 Hey everybody! This is Vito Gesualdi, head graphic designer and community coordinator for Star Realms. I’m very excited to let you guys know that all of the game’s promo cards have been sent off to the printer, and our fingers are crossed that we’ll be able to get those to our Kickstarter backers in time for the holidays. It was definitely a challenge to concept, test and design nineteen new cards in just under a month (especially with three of the card types needing new frame artwork), but we’re super pleased with the results. So pleased in fact, we want to share some of the cards with you today!

All 2-player set (and above) backers will be recieving the following promo cards:

This promo set features some very interesting new cards, including some two insanely powerful 7-cost ships, the first-ever card which can bounce an opponent’s base back to hand, and a cycle of new bases which all trigger whenever you play a base, like so: 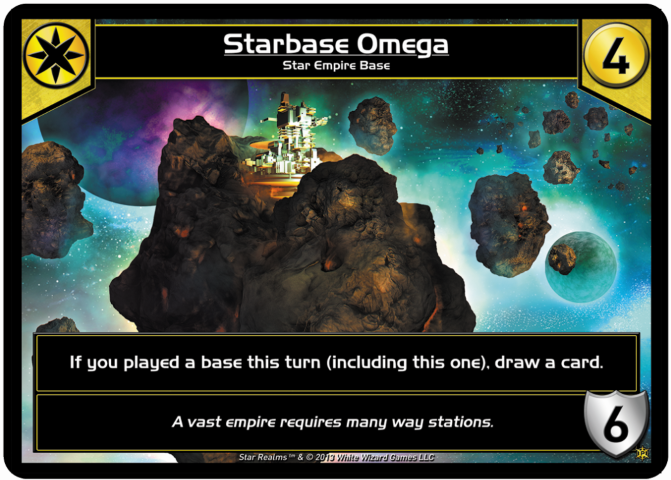 Obviously, with a base like Starbase Omega in your deck, you’re going to want to start investing hard in additional bases. More interestingly though, is how this card (and the other new bases) force players to rethink which bases they attack. Typically, players will want to destroy any bases which are guaranteed to produce their opponent additional resources each turn, but with Starbase in play destroying other bases actually becomes a liability, as it returns those bases to the opponent’s deck, giving them additional chances to re-trigger the Starbase. This means players may want to direct their fire at Starbase first, but with a sturdy 6 defense, its going to be a challenge to find enough firepower to get the job done! Starbase Omega is definitely a strong card, and arguably the strongest of this cycle.

As promised, our Kickstarter backers are also getting an exclusive promo card: Merc Cruiser. 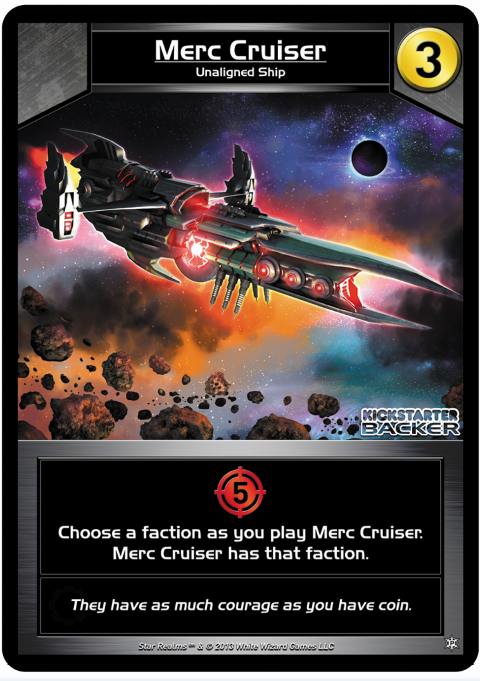 This is the game’s first unaligned card which; unlike the basic Scouts, Vipers and Explorers; is meant to be shuffled into the Trade Deck. Merc Cruiser is a devastating addition to a deck’s attack power, with only one other 3-cost card matching its 5 Combat bonus (the Blob’s Ram).  However, it’s the Cruiser’s ability to change faction which make it truly stand out, letting players activate their various ally abilities and earn other faction-specific benefits. Definitely look for this powerful shapeshifter in your first game!

The promised “ability” promo cards have a new name: Gambits. We’re also very pleased to announce that due to extra room on the print sheet, our backers will be receiving not just the 9 promised Gambit cards, but 3 additional Gambit cards as a bonus, for a total of 12!  They are:

Like all promos, the Gambits are an optional addition to your Star Realms game, but the exciting random abilities they offer are a really fun way to change up the experience. Gambits also feature a special silver border to make sure they don’t accidentally get shuffled into your Star Realms deck. Players can either choose their favorite Gambit (or Gambits) to bring into battle, or they can be dealt out randomly to players to really shake things up! Right now there are two types of Gambit cards: 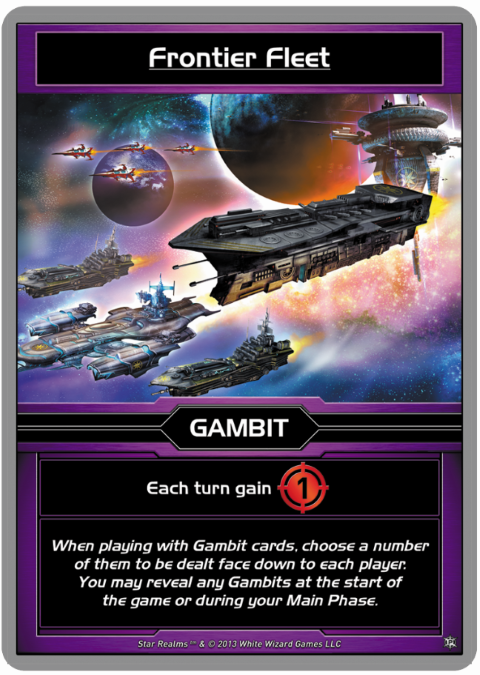 Frontier Fleet is an example of a gambit with a continuous effect, granting 1 additional combat every turn. Obviously, with each player having 50 Authority , the fleet seems more of an annoyance than a major threat, however don’t discount how useful that 1 combat can be. I’ve played many games of Star Realms where I was just 1 combat shy of taking out one of my opponent’s bases, forced to watch as it continued to rack up bonuses turn after turn. Having a Frontier Fleet to assist in my attack run would’ve been mighty helpful! 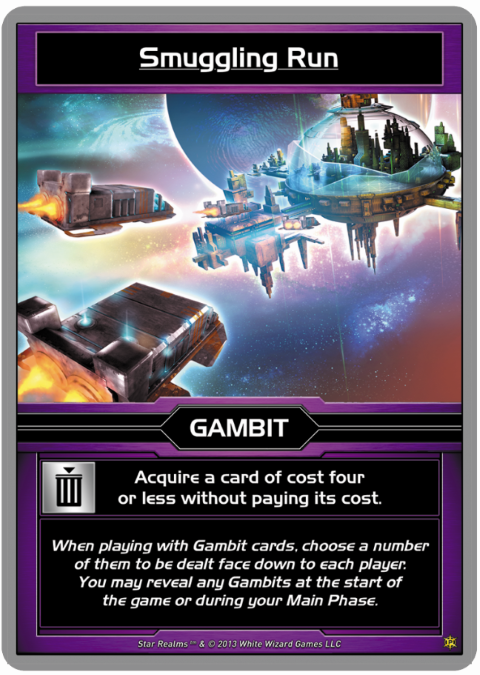 Smuggling Run is an example of a Gambit with a powerful scrap ability, giving players a one-time benefit to help them take control of the game. Smuggling Run is perhaps one of the most powerful gambits, letting you add a medium-sized ship to your deck as early as the first turn. Having that kind of power so early on can seriously put your opponent on the defensive, so if you’re dealt a Smuggling Run as one of your gambits do look to use it as early as possible.

Without a doubt, the coolest new cards are the challenges, giant bosses meant to be tackled either by a single player (solo) or together by a raiding party of multiple players (co-op). Our backers will be receiving four total boss cards, including Solo and Co-Op versions of perhaps the most deadly creature known to the Star Realms universe: 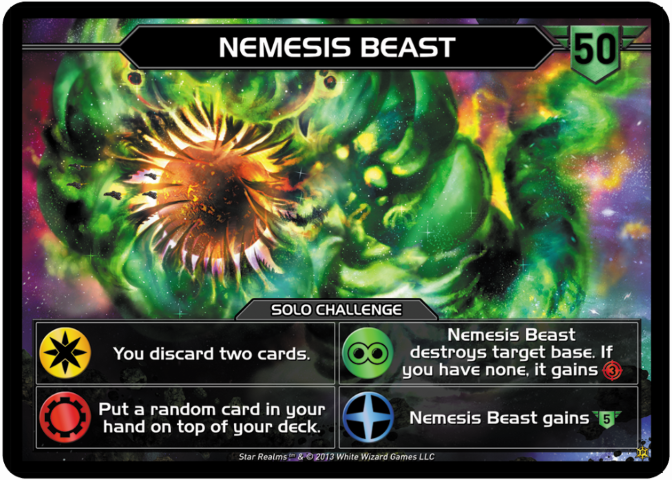 Nemesis Beast doesn’t just look scary, it’s actually so blisteringly powerful that even Rob and Darwin claim themselves barely able to defeat their own creation!  As the symbol in the top right shows, the Beast starts with the standard 50 authority, though its resemblance to a regular Star Realms player ends there. Rather than drawing from a deck of cards, each turn the Beast scraps the last card in the trade row and puts it face down, gaining combat equal to the total number of face down cards. Depending on the faction of the next card added to the trade row, one of Nemesis Beast’s powerful bonus abilities triggers: either wrecking your hand; blowing up your bases; screwing up your draws; or growing steadily more powerful.

And just so you don’t have to keep a rules sheet handy for these encounters, each challenge card features the complete rules on the reverse side: 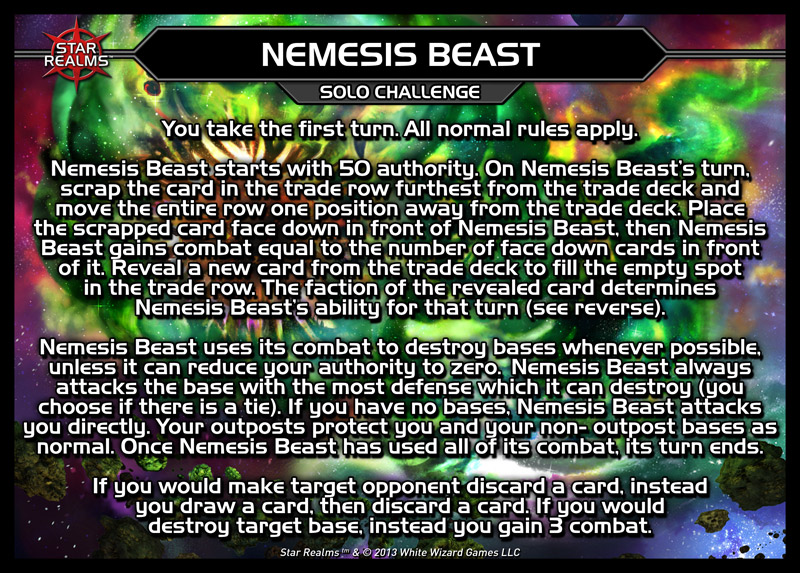 If you think that sounds tough, take a look at the co-op version: 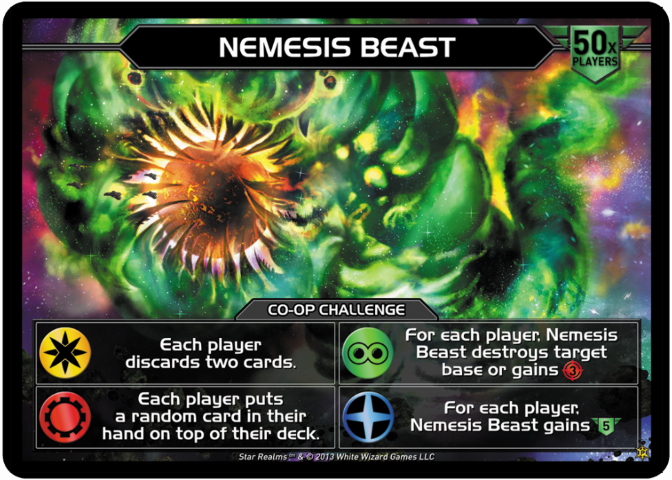 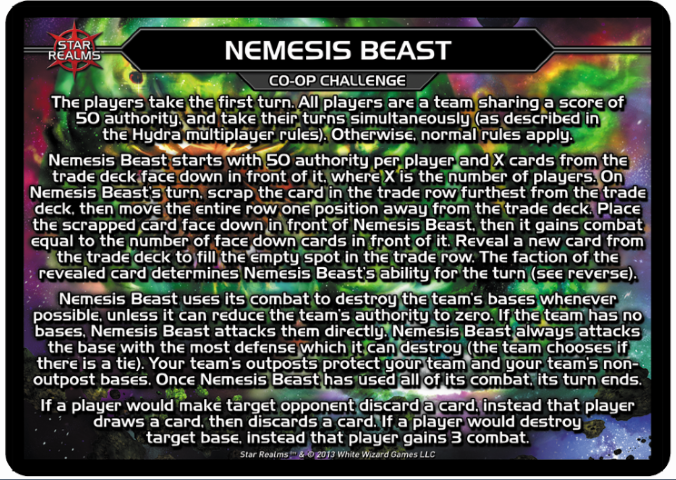 Yikes! If you thought the Beast was scary with 50 Authority, imagine it in a 2-player game (100 Authority), or a 4-player game (200 Authority!). Sure, the Beast will have to fend off a larger armada of players, but it now starts the game with face down cards equal to the number of players, its bonus abilities have been super-sized, and the players still only have a combined score of 50 Authority with which to fend off its attacks! Even with the players working as a team (using the Hydra multiplayer rules), the Beast’s continuous onslaught can be a nightmare to overcome without some serious teamwork.

Anyhow, that wraps up this promo card preview session, but we’ve got plenty more content coming your way. As Community Manager, I’ll be regularly posting Star Realms news, strategy tips, card spoilers and more! Please leave a comment if you’ve got an idea for a future column, or just have a general question you’d like to see answered. We also have a game play demo video which we should be posting in the next few days, so look for that!

Next time, I’ll be spoiling some cards from the base set. I’ll be spotlighting each of the four factions in turn, and showing off some of my favorite cards from each. Please vote on which faction you’d like to see spoiled first!