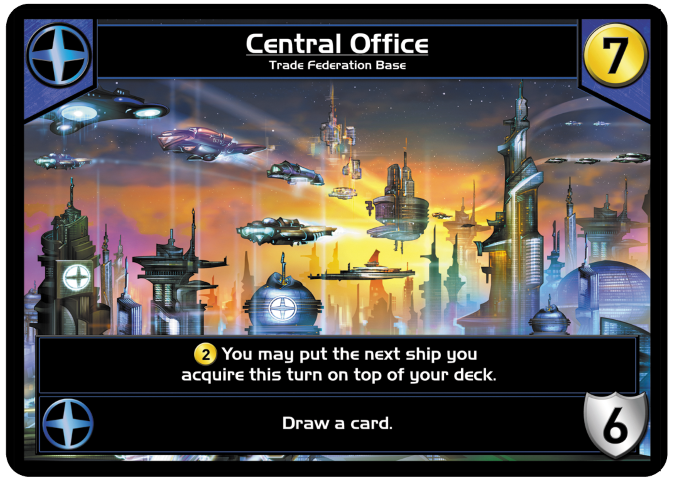 Sorry for the wait on the final installment of Trade Federation cards, but hopefully taking a look at the faction’s most impressive (and most expensive) offerings will still get you excited. I know I am! Central Office is interesting, the only faction homeworld to cost less than 8 Trade. Though this floating corporation may not look too scary, its ability to finance a combat-ready fleet and immediately put them into action makes the Office a force to be reckoned with. It’s primary ability not only funds the purchasing of your next ship, but also throws that bad boy right on top of the deck! This is an ability also seen on the ship Freighter, but here you get to use the ability each turn Central Office is in play, continually adding new toys to the top of the deck.

What’s really cool though is how well Central Office’s ally ability works with its primary ability. Not only do you get to put your new ship on top, but with another Federation card in play, you can immediately add that ship to hand! You can accomplish some seriously insane turns by abusing these two abilities. Hide your Office behind some outposts and purchase your way to victory, perhaps with the biggest ship in the game?: The only 8-cost ship in the game, Command Ship is the result of corporate greed at its best, a giant floating death machine ready to spread a very special kind of space diplomacy. The Command Ship is like a swiss army knife of  power: smashing through the opponent’s defenses, keeping your authority score up, and snagging two more cards from the deck. Its that insane card draw which makes the Command Ship the kind of card which can easily put a game away, letting loose the opening volley of firepower before summoning up the rest of your forces.

Then there’s the ally ability, smashing through a troublesome base without looking back. Even the strongest defenses can’t stand against a Command Ship who brought allies to the table, and again, that card draw makes it extremely likely that the Federation player can draw into some friends. Still, the card draw is so powerful that Command Ship is an obvious purchase regardless of your faction strategy, though you’ll first need to find the whopping 8 Trade needed to buy it!

Tomorrow, we finally take a look at the galaxy’s greatest menace: The Blob. See you there, Star Realms believers!