Its time to kick off another Star Realms preview week, and this time around we’re taking a look at the mighty conglomerate known as the Trade Federation. Representing Earth and its surrounding colonies, the Federation’s government is comprised of various powerful corporations, who tend to focus less on bettering the lives of their citizenry, and more on ensuring massive profits for those at the top (read the faction page for more details!). Representing this, the Federation’s chief abilities are to generate huge amounts of Trade and Authority, letting them invest in giant toys with which to smash their enemies. 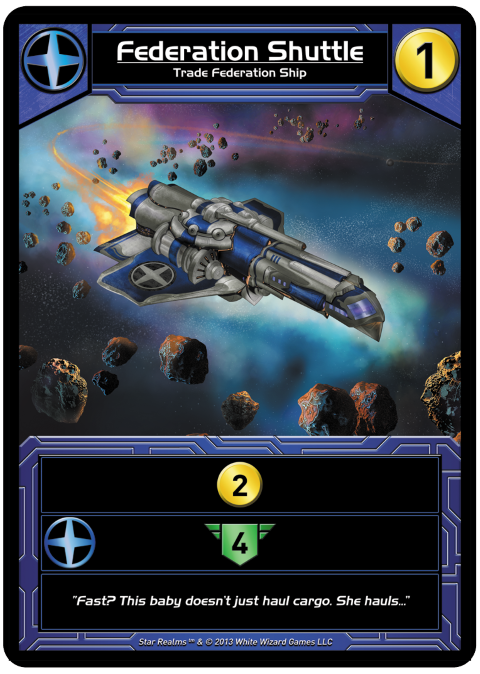 Federation Shuttle stands out as the only 1-cost ship capable of generating a solid 2 Trade, doing so at a cheaper cost than the basic 2-Cost Explorer. Though the card isn’t strictly better than the Explorer (which can scrap itself to thin your deck), for most decks the Federation is a solid early buy, any potential it has of clogging up your draws offset by its solid trade boost. For the Federation player however, the 4 Authority ally ability is a solid boost. A heavy Federation build can sometimes gain an extra 10-20 points of Authority very early on, giving its player more time to fend off an aggressive player while still filling the deck with bombs. If your opponent seems uninterested in the boys in blue, definitely make a move on cards like Federation Shuttle, or its big brother: Cutter. 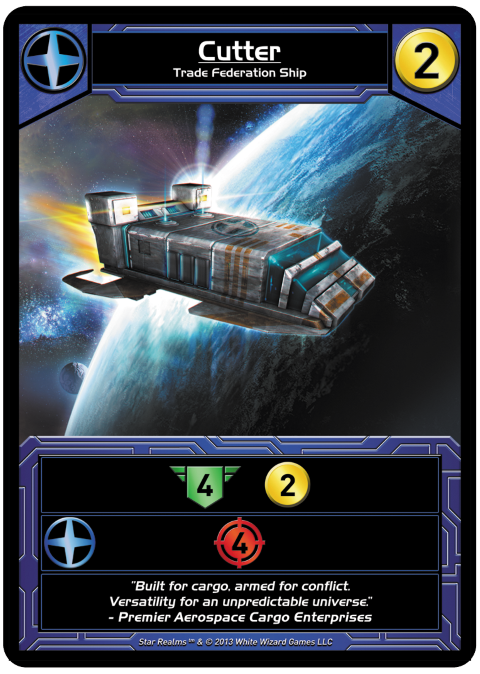 Cutter is one of my favorite 2-cost cards, and a signal which often sends me chasing after a Federation build. It’s main ability mimics Federation Shuttle perfectly, boosting both your Trade and Authority by significant amounts, however the ally ability makes it even more solid. The Federation is perhaps the weakest faction by way of combat, and I find they lose most often when facing off against an opponent hiding behind a stack of powerful bases. Cutter is the Federation’s only low cost ship which can deal a solid amount of damage and potentially smash through some of those defenses. Though the Federation player should consider investing in another faction’s combat options, Cutter is a very versatile ship potentially worth running regardless of your faction strategy.