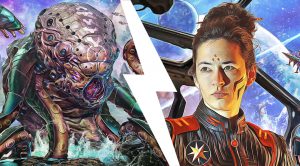 Who inspires you to play Star Realms better? Is there an opponent that has you second-guessing trade row purchases? What is that in-game-name that sends tension through your veins?

Let us take a moment to celebrate rivalries.

We want to hear about your rivals. Whether you throw down face-to-face, or digitally on separate continents, please share about positive competitive relationships that have developed playing Star Realms.

To set the tone we have feature contributions from notable players, Scott Heise (HomerJr) and Robert Dixon (Kinkade).

Scott Heise: These days, I play most of my Star Realms through various leagues and tournaments organized via BoardGameGeek or the Facebook fan page. Even though I encounter many of the same active players wherever I play, I tend to view my rivals within the context of that specific league or tournament. For example, in the long-running BGG Star Realms League, the player I admired (and feared) most in Platinum Tier was Flying Arrow aka TaeJin Ko. He won multiple Platinum Tier titles before eventually retiring from the league (and giving the rest of us a chance to win), and we eventually became friendly rivals who collaborated on strategies. I can’t remember a single time that he ever bought a bad card and somehow he never seemed to have any of his cards buried at the bottom of his deck.

Back when I was playing a lot of random games to level up, I always seemed to get matched against a player named MechDroid who I crowned my unofficial archnemesis. I have no idea who this person is (I’ve never seen them show up in any of the groups, forums, or blogs), but I had such a bad run against him for what seemed like months that swear it seemed like every game he started with a Command Ship in his deck. I don’t play random games very often anymore, but I just know he/she is out there, somewhere, just waiting for me…
A few more “rivals”, in no particular order: Crshaner, SweetJustice, Dusto, MazerRackham, Vidarrr, Klemp, Agamon, benjotron, and, of course… DARWIN

Robert Dixon: When I think of “Star Realms” and “rivalries” there are two names that pop straight to mind. When I sort my PvP stats for people I have played the most, the same two names are right at the top. Best of all, when I think about how much I like this community and friends I have found through this game, the same two jump straight to mind. Pat Myers (karmakanik) and Derek Thompson (aldaryn).

I was a few hundred games into online play, and fairly pleased with my win percentage in the low 60s, when I saw a screen-shot Pat posted with a milestone level or number of games and sporting a 66% win rate. Wow, I knew this dude was a monster. I clicked his profile pic and saw he lived in Narberth, Pennsylvania. This is going to sound odd, but I may or may not live in Narberth, Pennsylvania (very strange local politics about boundaries and whether a shared zip code defines the place, but depending on who is talking I either live adjacently in Penn Valley or in Narberth itself). This Star Realms master was practically my neighbor! I reached out to him, we met up for some gaming and beers, and instantly hit it off. Talking about things he even pieced together that about ten years ago I had made a move in a chess game against him. He was playing a co-worker who asked my advice in a position and I’d delivered. The list of things I don’t like about Pat is exactly one item long: The jerk has a winning record against me in Star Realms. He is 114-108 in the recorded games. Pat’s style is completely different from mine. He favors ships and aggression and I am all about obnoxious base walls. He forces me to be very careful about what formats and trade row I let myself veer towards my preferred archetype. The heartless bastard has zero qualms about bashing me in not one, but two or even three turns before I finally manage to establish my impenetrable wall of life gain and card draw. He has even forced me to resort to playing Race for the Galaxy with him to salvage some pride.

Derek is the flip side. His preferred playing style is similar to mine, but he likes to play all, while I shun gambits and events. I long had a policy of accepting every challenge (currently cutting back on my gaming a little, so temporarily suspending that) and that meant A LOT of games with Derek on the ALL format. And what games they have been. My favorite messages to receive are when I manage a spectacular comeback against early gambit nonsense on his side and he can’t help but vent to his abuser. Those just warm my little Grinch heart. When not commiserating in defeats or reveling in victories, Derek and I exchanged a lot of chats about our preferred play style and what to look for when going for infinite bases and when to pivot. Those conversations with Derek are the second best part of our rivalry. The best part is that I am currently up 89-83.

I like that my combined record against the two is exactly even. Just shy of 400 games and so many of them incredible games and two great friendships. Who could ask more of any game?

Thank you, Scott and Robert!