As of September 2019, we are including edition info with the copyright info on our rules components (inserts and/or books). This will enable us to communicate changes and/or corrections separately for each edition. As a result, owners of newer editions will be able to ignore changes and corrections for older editions. For example, there were some minor errors in the First Edition Star Realms Frontiers Rulebook. In the next printing, we will correct these errors and include “Second Edition” in the rulebook. Rules components printed prior to September 2019 do not include edition info and may be assumed to be “first edition” or a minor variation of it.

In the rulebook, “Nemesis Beast” section, page 34, the 5th sentence should read “If playing solo, you start with 50 Authority. Otherwise, all players form a Hydra team (see page 17) and share a score of 50 Authority.” (In a Hydra team, players do not use separate Authority scores.)

In the rulebook, “Cost of Freedom” section, page 40, the 5th sentence should read “Each player starts with a standard Personal Deck (8 Scouts and 2 Vipers)”. (The boss uses the remaining Trade Federation cards from Frontiers to make its personal deck. It does not use a standard personal deck.)

In the rulebook, “Nemesis Beast” section, the text has been updated as follows: All players share a score of 50 Authority (regardless of the number of players). When playing with more than one player, players are a Hydra team.

Also note: The challenge score card set only goes up to 159. With 4 players, the Nemesis Beast starts with 200 Authority. Use a pencil and paper as needed. 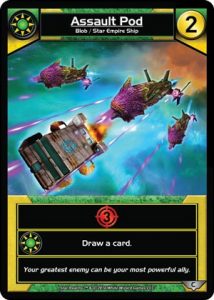 If an effect would check the faction of something that has multiple factions, perform the check for each of those factions. If one or more of the factions would satisfy the effect, you must use one of those factions to resolve the effect. For example, the Ally mission can be completed with any two ally abilities from different factions. You have Assault Pod and Blob Fighter in play. Assault Pod’s ally ability has two factions (Blob/Star Empire), so Ally will check both of them:

The Rule and Unite missions require playing cards from multiple factions. Similarly to Ally, playing an Embassy Base (Star Empire/Trade Federation) and an Alliance Landing (Star Empire/Trade Federation) in the same turn will activate the Rule mission, because there are two factions across both bases. Note that cards without factions such as Mercenary Garrison (an Unaligned Base) do not count for these missions, and that there must be two separate factioned bases for Rule and three separate factioned ships for Unite.

Some of our cards have changed between printings or will change in future printings. This section identifies the most up-to-date versions of those cards. Players should use whichever version of a card they have, keeping any errata in mind. When using cards marked with an asterisk (*), use your version as printed literally and ignore any errata. If you’re using any of the marked cards, any player may request to see them before setting up the game. 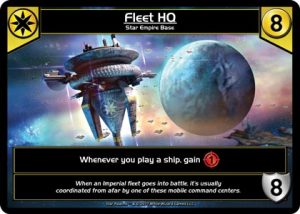 Fleet HQ (Core Set)
Date of errata: Before 2019
Note: Only ships played while Fleet HQ is in play get the 1 Combat bonus.
New text: Whenever you play a ship, gain {1 combat}
Old text: All of your ships get {1 combat} 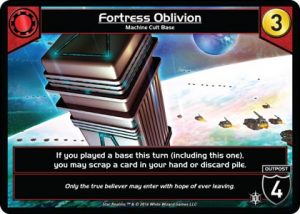 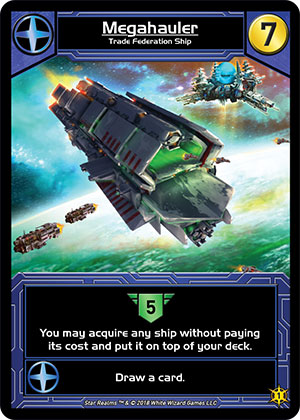 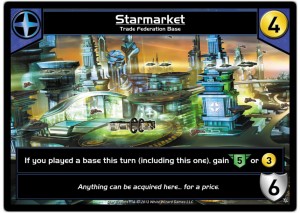 *Starmarket (Year 1 Promos / Promo Pack 1)
Date of errata: November 6, 2019
Note: This card was originally printed with cost 4. It was later printed with cost 5. The cost is 4 in the Star Realms digital app. The cost will be 4 in future printings.
New Cost: 4
Old Cost: 5 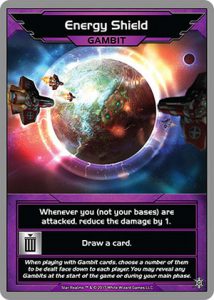 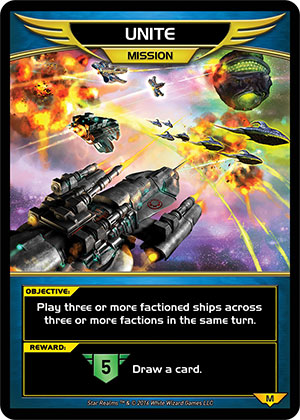 Unite (United Missions)
Date of errata: November 6, 2019
Note: This update clarifies the intended functionality. Unaligned ships do not have a faction and do not count toward completing this mission. Also note that a single ship may represent more than one of the factions. For example, a Machine Cult/Trade Federation ship and two Blob ships can complete this mission.
New Objective Text: Play three or more factioned ships across three or more factions in the same turn.
Old Objective Text: Play three ships from different factions in the same turn. 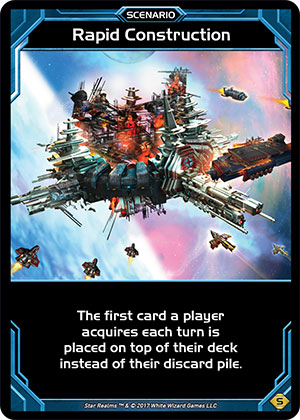 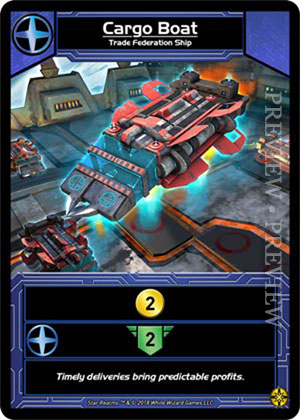 Merc Cruiser/Blob World – If you choose Blob for the faction, this will count towards Blob World, since you are naming a faction as you play the card.

(Megahauler / Blob Carrier) + (Emperor’s Dreadnaught / Colony Seed Ship) – If you acquire Emperor’s Dreadnaught or Colony Seed Ship with Megahauler or Blob Carrier, it will end up on top of your deck regardless of whether you played a card of the same faction this turn. You cannot resolve half of Megahauler/Blob Carrier’s ability, so if you decide to acquire a card for free, it is acquired to the top of the deck. There is no chance for the “acquire to hand” ability to happen before it’s on top of your deck.

Patience Rewarded – The player whose turn it is scraps and sets aside a card first (so the second player can pick the card that replaces it in the trade row).

Stealth Tower – This will become a copy of another base after it enters play, so it won’t count as a card played of the copied faction. Ally abilities will still trigger as normal.

“Looking” at the Top of a Deck
If an effect would reveal or look at a number of cards on the top of a deck that is greater than the number of cards currently in that deck, the deck’s owner first puts their discard pile on the bottom of their deck in a random order. For example, this may happen in the following cases:

Have a rules question you don’t see answered here? Contact us!

Q: Is there a Star Realms podcast?
A: Yes! We highly recommend the Megahaulin Podcast and Megahaulin Blog. Tons of great interviews, tips and news for both new and advanced players.

Q: Are there any competitive leagues for Star Realms?
A: Oh yeah, definitely! You can find tournament details both in A Star Realms Fan Created Community Page and there is a Board Game Geek Star Realms League.

Q: Can I go above my starting Authority total?
A: Yes! There is no limit to the amount of Authority you can gain.

Q: Does damage dealt to a base carry over to players if more damage is dealt than the base’s defense?
A: In Star Realms, cards which grant combat add that combat to an imaginary combat stack, which you can distribute as you please. So, if your cards have given you a total of ten combat, you could use six combat to destroy a Mech World and use the remaining four combat to attack your opponent.

Q: If a card has two icons as one of its abilities (like Cutter), do I have to choose which one I want?
A: No, on a card like Cutter, you get both (2 Trade and 4 Authority). The only time you have to choose is if there is an “or” clause separating the two icons (like on Patrol Mech).

Q: When a base is destroyed, is it gone forever (scrapped)?
A: No, it goes to the discard pile.

Q: How do I play with more than 2 players?
A: Each copy of the Star Realms base game supports up to 2 players. If you want to play with 3-4 players, you’ll need two copies. For 5-6, you’ll need three copies. Shuffle the trade deck cards together to maintain the game’s balance.

Q: How do I separate the trade decks after playing?
A: We recommend sleeving one set upside-down, or using different colored card sleeves for each copy of the game, to make them easier to separate afterwards. For reference, each copy of the base game contains the following cards:

Q: I purchased the full game but some features are still unavailable. What’s wrong?
A: To access the full features of the digital game, you must navigate to your user profile (within the “Play Online” section), then click “Restore Purchases.” That should unlock all content on your device.

Q: I purchased an expansion on Steam, but it’s not unlocking on my other devices. What should I do?
A: Please open Star Realms on your Steam device, go to Play Online, and go to the user profile in the bottom left. Click “log out” in the next screen, then go back to Play Online. The app will log you in automatically. Your purchase should be unlocked, and you will be able to use restore purchases to restore it on your other devices after.

Q: Mission (#) is impossible! What do I do!?
A: We assure you, none of the missions are impossible. Believe in yourself and overcome the odds!

Q: My Wins are not registering! What do I do?
A: Most likely, you are playing Challenge games, where you directly challenged someone, someone challenged you and accepted, or you are playing a “rematch”. In those games, the result doesn’t count towards your wins, nor towards your losses. This was implemented to prevent abuse with dummy accounts.

Q: When do the lifetime/monthly/weekly rankings get calculated?
A:We take the final user rankings at 3:05am UTC time (which is approximately the same time as GMT) to compute if you should get an avatar:

Q: If I am playing against a challenge card and flip over a factionless card (like Merc Cruiser), what do I do?
A: The player whom will be directly affected by the card chooses its faction. If multiple players would be affected, they choose among them which faction to declare for the factionless card.

Q: Can I keep track of my opponent’s purchases by noting them on a piece of paper (or similar?)
A: As this would greatly slow down the pace of the game, note taking is not allowed in official Star Realms events.