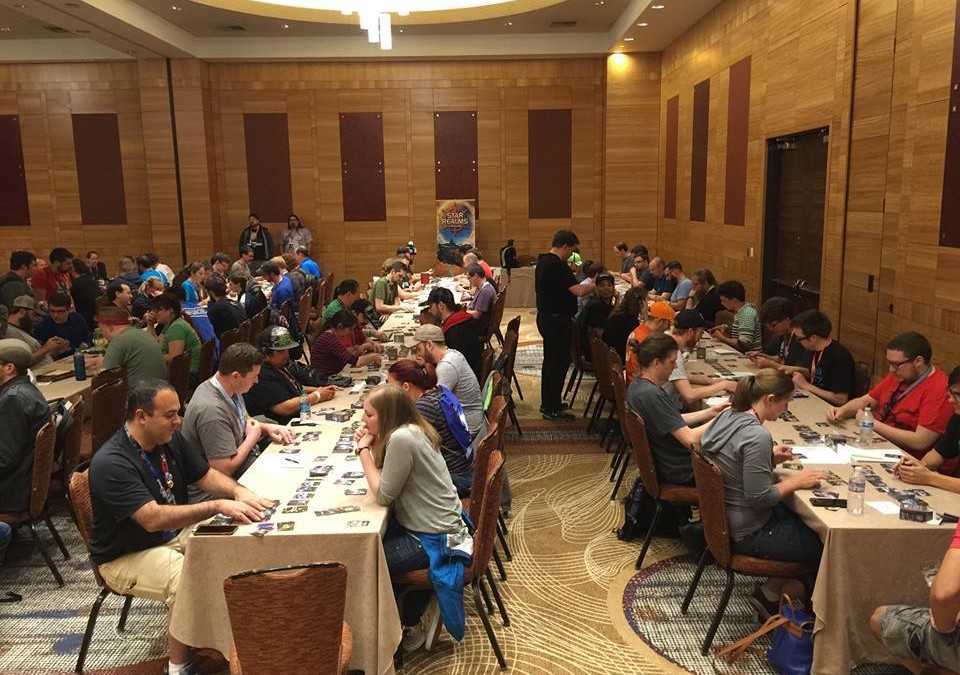 This is a guest post by Brendan Lapsley aka Carnie. This blogpost was originally posted on the Megahaulin blog. We really liked it, and we got their permission to repost it here. Definitely check out the Megahaulin blog to read their other awesome blogposts!

A lot of people in the Star Realms community love playing in the online events happening both on Facebook and on BoardGameGeek.  For most people, this is all they really need.  But for some, running their own tournaments (either online or in person) is something they would at least like to try.

About a year ago, I started going to a local game store (I had just moved so I was looking for somewhere to game).  After going to a few game nights and seeing their event calendar, I asked if they ever did any Star Realms tournaments.  The answer I got was that they would love to, but didn’t have the man-power to do it.  They even had some of the prize kits buried in a closet somewhere.  They asked if I wanted to run them on a regular basis as part of a monthly rotation (Monday is card game night, the 1st Monday of the month is now our SR night).  We don’t always have the players we need to run a tournament, but we’ve had nights where instead of doing that, we had 2-3 players who never played before sit down with us and learn how to play.

Having run a few online tournaments and running a monthly tournament at my new FLGS (Favorite Local Game Store), I wanted to share some of the major points I’ve learned to help the game spread even more.

Location – First thing to do is figure out where the tournament is going to be.  Most people who are interested will want to run it at a game store, but if you are just looking to play with friends, maybe do it at someone’s house.  If you are running it at a game store, make sure to talk to them about a few things.  First, see how involved they want to be.  Some stores want to be very hands off, some want to do it all themselves, and everything in the middle.  Working things out with the venue is probably the most important part of running a tournament.

Format – Most of the time, in person tournaments are out to find a single winner.  In my experience, Swiss is the best way to do this while making sure that people still play plenty of games.  Best 2 out of 3 in each round lets people feel that it is fairly even and helps mitigate complaints of bad luck.  Each round should have 1 hour allocated to it, but expect some rounds to finish very quickly.  I have had rounds before where one matchup was done in 15 minutes while another lasted for 55, it all depends on the cards.

The number of rounds will be dependent on a few factors.  Primarily number of players and time limit for the tournament.  Often 3 rounds of Swiss will suffice.  What I prefer to do is 3 rounds of Swiss, and if we have less than 8 players and enough time, add a 4th round.  Otherwise, if we have more than 8 players, take the top 4 into a single elimination, bracket-style tournament.  If you are short on time, maybe only pull the top 2 into a championship.

To determine top players, you need to have a scoring system.  The scoring system I use is for each matchup, the winner will get 3 points.  If the set is 2-0 (winner took both of the first two games), the losing player gets 0 points.  If the set is 2-1, the losing player gets 1 point.  In each round of the Swiss, try and match players up as best you can, based on current score.  In the case of a tie to determine winners, you can either look at who won if the tied players faced off or you can add up the scores of each player’s opponents.  This will give you an idea of how strong their competition was.  Rewarding the player who played stronger opponents and managed to get to the top.

Game type – Make sure this is clearly stated.  In most cases, it will be just the base set, as that is what is regularly available.  If you want to do something different, make sure it is clear and that you have enough copies to go around.

Clear Expectations – Most players coming for a Star Realms tournament have a pretty good idea what they are in for.  But just in case, it’s usually a good idea to get in front of everyone before the tournament starts to make sure everyone understands the game type and format as well as to make yourself available to answer any questions.

Differences from the App – Playing the physical game is surprisingly different from playing the digital game.  If you are running a tournament, you are also a judge.  Meaning you need to know the key differences for the format you are playing.  Many players will only have experience with the digital game and may not understand some rules that go along with the physical version.  Here are some of the key differences:

Prizes – If you are doing prizes, it’s usually a good idea to declare it ahead of time.  This can often bring in more players.  You can see if your FLGS has prizes available or if they are willing to help bring them in.  WWG has Star Realms tournament kits that work very well as prize support.  These will include special prizes for 1st (usually a SR play mat) and 2nd (early kits have Gambit packs, later ones have other prizes), 8 copies of a rarer card for the top 8 players and 32 copies of less rare cards for either top 32 or participation (this gives you a good reason to cap player count at 32).  These are how to get most of the “Ships & Bases” from the app’s expansion pack.

Location – If you would like to run an online tournament, one of the first things you need to do is find a central location to run it from.  The main ones for Star Realms right now are Facebook and BGG, but depending on your scope, it can really be anything.  The main purpose is to have somewhere that all the participants can use and refer to.

Format – Before starting, you need to decide on a format.  This could be single elimination, double elimination, swiss or any number of formats.  Even teams.  I also suggest that matches are best 2 out of 3 to avoid complaints of unfairness, but it really depends on what you are trying to do.  An online tool to help this is www.challonge.com. This is a simple interface tournament tracker.  It supports a few different types and can help guide you.

I would advise against a double elimination style tournament, just from personal experience.  It is probably more fair in the long run, but there are significant wait times between games for players as they are knocked into the loser’s bracket if they are playing fast at first.  Also, depending on how clear the message is, some players might lose once and think they are out, causing you to chase them down again.

Game type – With the expansion to the app, there are a few types of ways to play.  You should base your decision on your target audience.  If you want to target newer players, the base game is probably the way to go, while experienced players often have their own preference.  Just state ahead of time which to use and stick with it.

Clear Expectations – When you are recruiting people to play, make sure they understand what is expected of them.  This could be a time frame to play, a format to use or how they should be reporting.

Prizes – This is probably a bit less important for online tournaments.  Most people are fine with winning bragging rights, and it’s usually not difficult to find players willing to just dive in.  If you have something for the winner(s), great.  If not, don’t worry about it too much.  As long as there isn’t cost of entry, people generally won’t complain about playing an awesome game.

So if you are looking to run a tournament or some something regular, it’s not too hard.  The first step is just asking around and getting details.

As the organizer, you need to remember to be flexible, but you have the final decision on matters. It also helps a lot to make sure you are available and open.  In person, this means pausing your game to answer questions or to report scores.  Online, this could just mean checking in enough that people are not waiting on you for new rounds or to answer questions. And, most importantly, remember to HAVE FUN.

Hopefully this helps a few more tournaments creep up and helps to spread Star Realms to even more people.