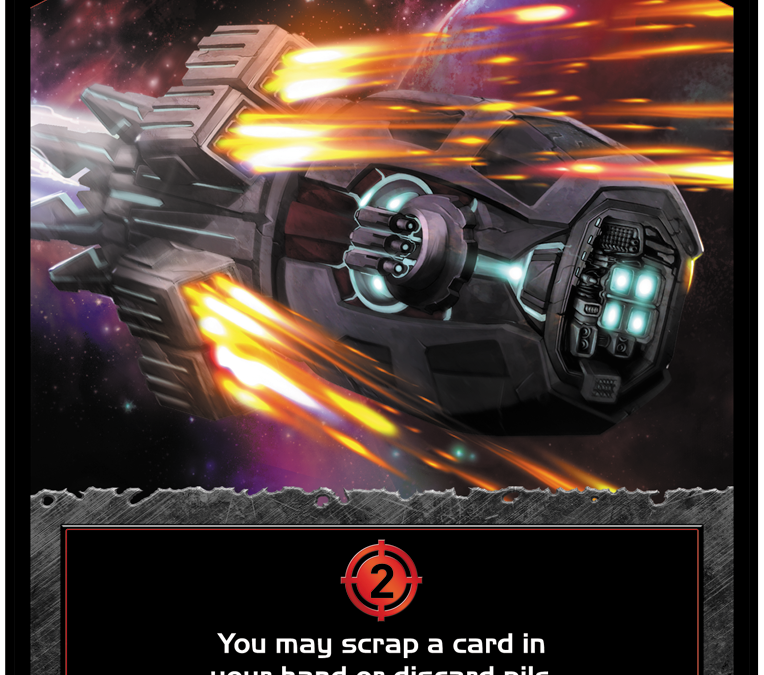 Hey Star Realms believers! Vito Gesualdi here with another exciting week of Star Realms preview cards! You voted and this week we’re looking at those radical mech-loving denizens of the Machine Cult. After being cut off from the rest of the civilized world, the Machine Cult found technology to be their only protection against the Blob menace, eventually coming to worship their metal creations as gods (learn more on the Star Realms faction page). Thematically, their core mechanic is to scrap (remove from the game) cards from their owner’s deck, casting aside junk to help shape a realm where their tech alone reigns supreme! Let’s take a look at their core trio of worker bots which showcase the cult’s basic strategy: As mentioned, each faction has a 1-Cost ship available, and Trade Bot is my personal favorite. It provides the same 1 Trade which you get from your deck’s Scouts, with the added bonus of helping to thin your deck by scrapping unwanted cards. Interestingly, Machine Cult cards like Trade Bot can usually fit into any faction’s strategy. After all, the first time you play a Trade Bot you’ll more than likely be able to scrap one of your 8 Scouts or 2 Vipers. This means that the bot hasn’t made your deck any bulkier, you’ve just replaced a card with this upgraded Scout! However each additional time you play the little bot, your deck gets even thinner, making it much easier to draw into your heavy-hitters. So, if you’ve got an extra 1 Trade sitting around in the early game, don’t worry too much about activating the bot’s 2 Combat ally ability, and focus on taking advantage of its powerful scrapping potential! Missile Bot on the other hand, is a card you may want to avoid unless you plan on investing a bit more into the cult. In the early game most decks tend to focus on generating as much Trade as possible, making 2-Cost cards like Trade Pod (3 Trade) and Cutter (2 Trade, 4 Authority) great early picks regardless of faction strategy. Since Missile Bot is a purely combat-oriented card, its just not as sexy an option for starting off the game, unless you know you’ll be pairing it up with its brothers in red. That being said, for the dedicated Machine Cult player, loading up on every scrap card you see is a more than solid strategy. Just the other day I was able to use an aggressive pile of bots to thin my deck down to just 8 cards, making it so I could draw my entire deck every turn! The Machine Cult tends to be a bit weaker than the other factions in terms of Trade / Combat potential, but when you’re able to draw from a deck devoid of Vipers / Scouts, you can more than make up for that handicap. Then there’s Supply Bot, Trade Bot’s big brother and a card I highly recommend snagging off that early 3 Scout hand. Here you won’t just be replacing your Scout with that first scrap, you’ll actually be upgrading it to an Explorer! 2 Trade and a free scrap is insanely powerful, loading up the deck with new goodies while casting aside the trash. This is another card I recommend to all factions. If you’re eyeing an Explorer but have an extra dollar to spare, definitely go for the Supply Bot. We also see yet another 2 Combat ally ability, showing how the cult likes to work together. The leaner your deck becomes, the more likely you’ll be to draw into an all-red hand, turning your fleet of dedicating scrapping workhorses into a surprise robot assault!