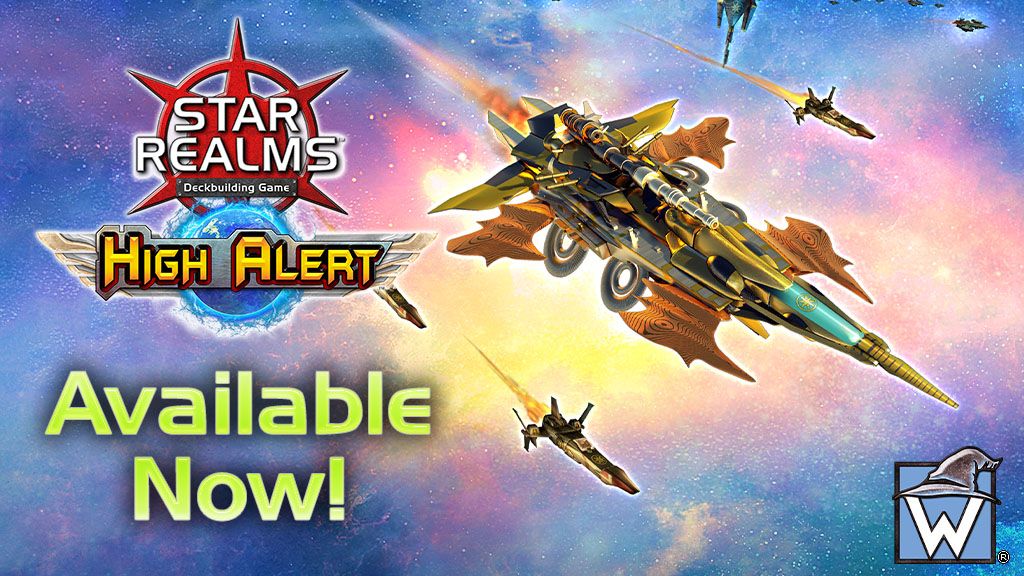 We’re super excited to announce that we’ve got some awesome Epic and Star Realms new releases available in retail starting this week, ask for them at your local game store! If they don’t have them in stock, they should be able to order these from their distributor.  There are several new Epic Card Game sets, a large Epic storage box, and the Star Realms High Alert Expansions.

We have a new Epic starter set, Epic Duels, with a play by play tutorial walk-through of an entire game, making it even easier to learn to play Epic. With Epic Card Game, you and a friend can play preconstructed decks, sealed decks or even draft. If you love trading card games, you’ll love the awesome new sets that are now out!

See what The Dice Tower think of Epic Card Game.

Star Realms High Alert expansion packs are a set of super awesome expansion packs for Star Realms including Heroes which contains new multi-faction hero cards, the Invasion pack which features new ships and bases with the Double Ally mechanic, Requisition which includes all new ships and bases that are 1 trade cheaper to acquire for each card of their faction you have played this turn and the Tech pack featuring the new Tech card type, which comes straight into play when acquired and gives you a permanent ability you can activate once per turn with trade! 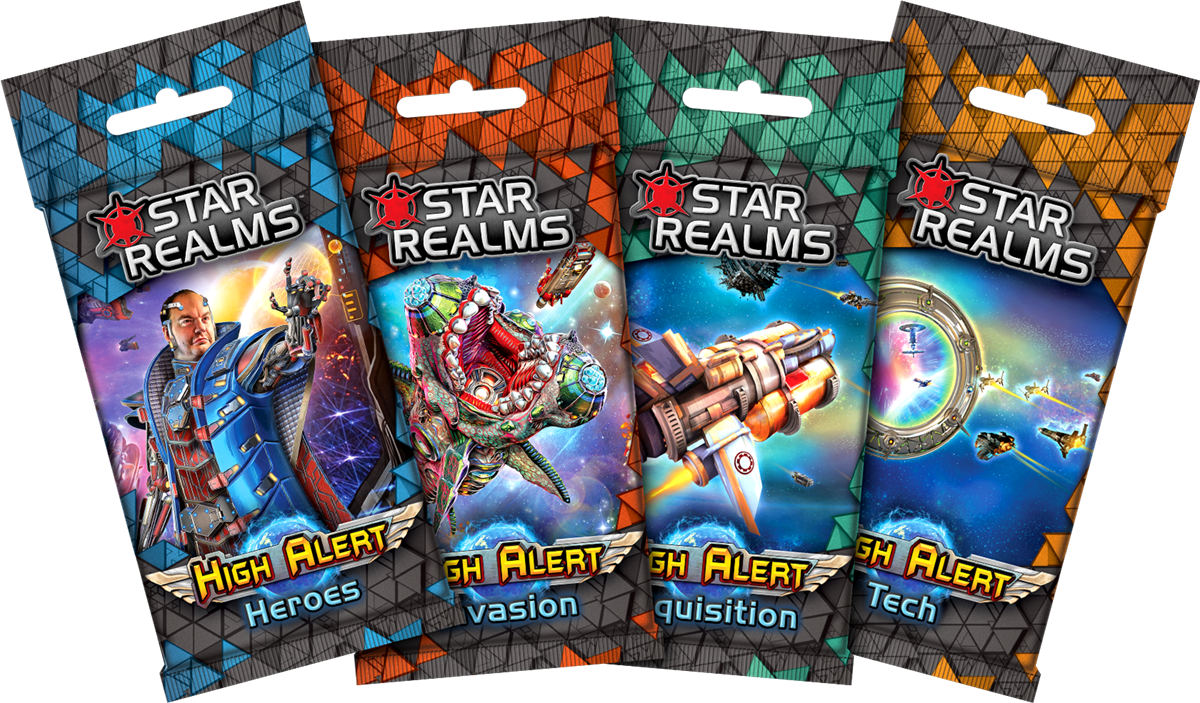 Epic Card Game: Duels ($19.99) is a super easy to learn two player starter set for Epic Card Game, including a full game step by step Quickstart Guide that is fantastic for new players and existing players. While it focuses on simpler gameplay, it is balanced with other Epic sets and is still a great addition to experienced players’ collections. The box includes 60 all-new game cards, 34 token cards, score cards, rules reference cards, “Gold” trackers, and a rulebook. 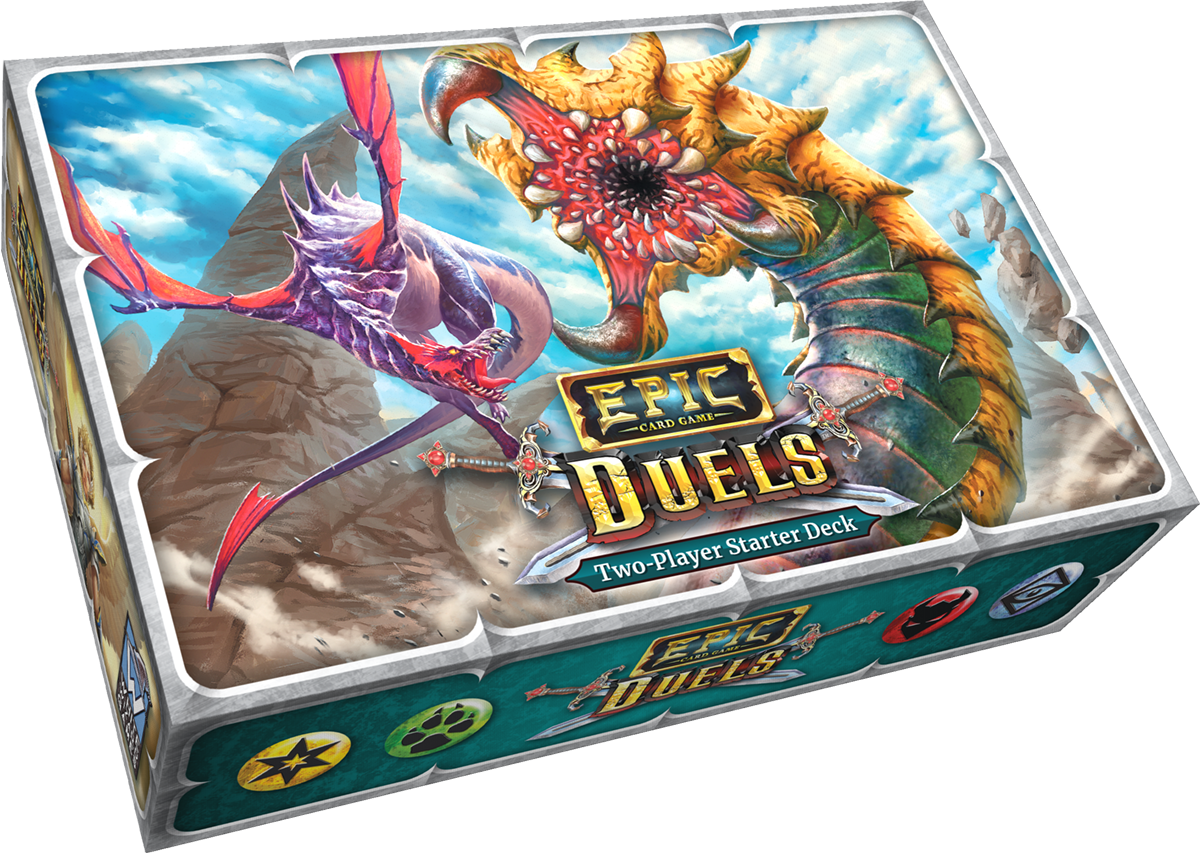 Epic Guardians of Gowana ($19.99) is a two-player box set exploring the tropical supercontinent of Gowana, land of the Gods. Athough this is a complete game on it’s own, Guardians of Gowana can also be combined with other Epic sets to support more players so more people can join in the Epic Card Game fun! The box includes 60 all-new game cards, 34 token cards, score cards, rules reference cards, “Gold” trackers, “+1/+1” counters, and a rulebook. 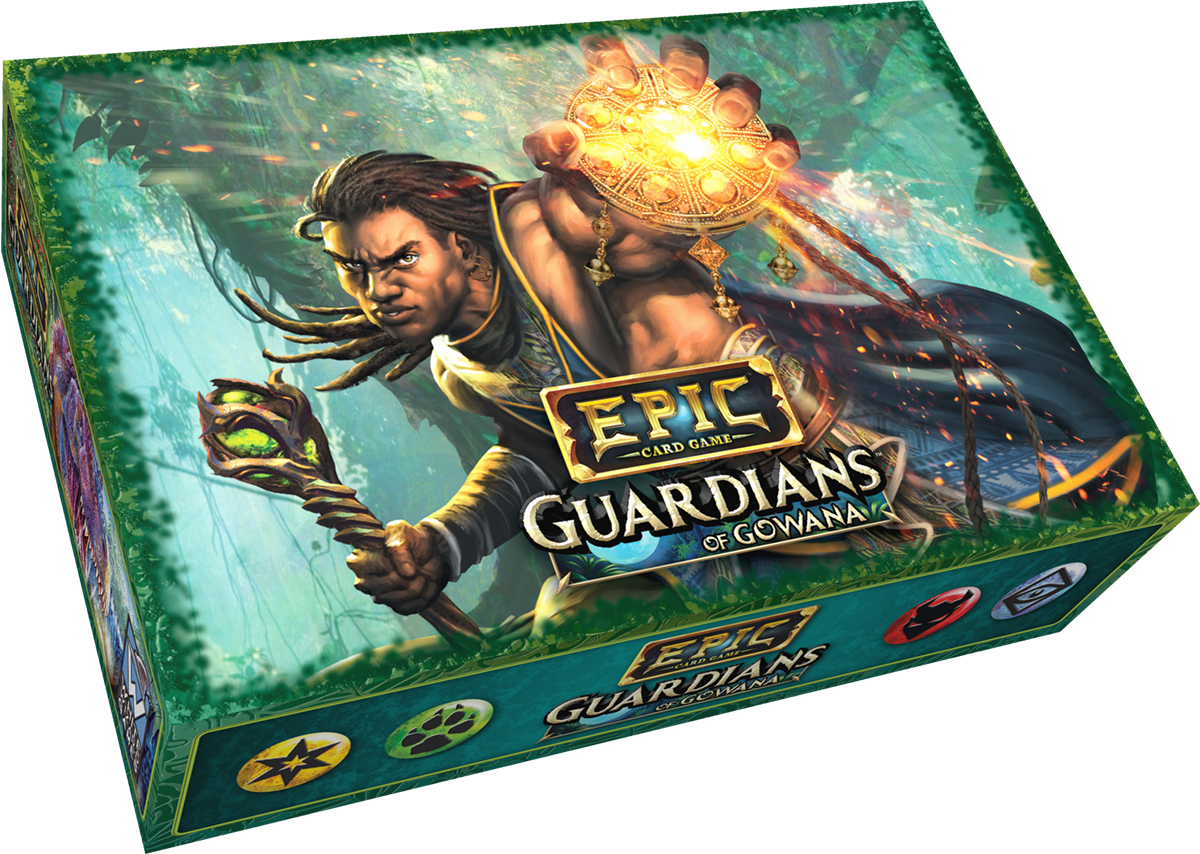 Lost Tribe ($6 each pack) features four new single-alignment packs for use with Epic Card Game (an Evil, a Good, a Sage and a Wild pack). A war fleet from the far north was caught in a mighty storm. Pulled hopelessly off course, the gods brought these ships to the shores of Gowana. Now this lost tribe finds themselves stranded in the contested lands between two of Gowana’s great nations.

Each pack includes 15 different all-new game cards of that pack’s alignment (Good, Evil, Wild or Sage). Two double sided tokens, two Score Cards, a reference rules card. These expansion packs can be played with any other Epic set and you can also combine any two Lost Tribe packs to create a 30 card, two-color deck! 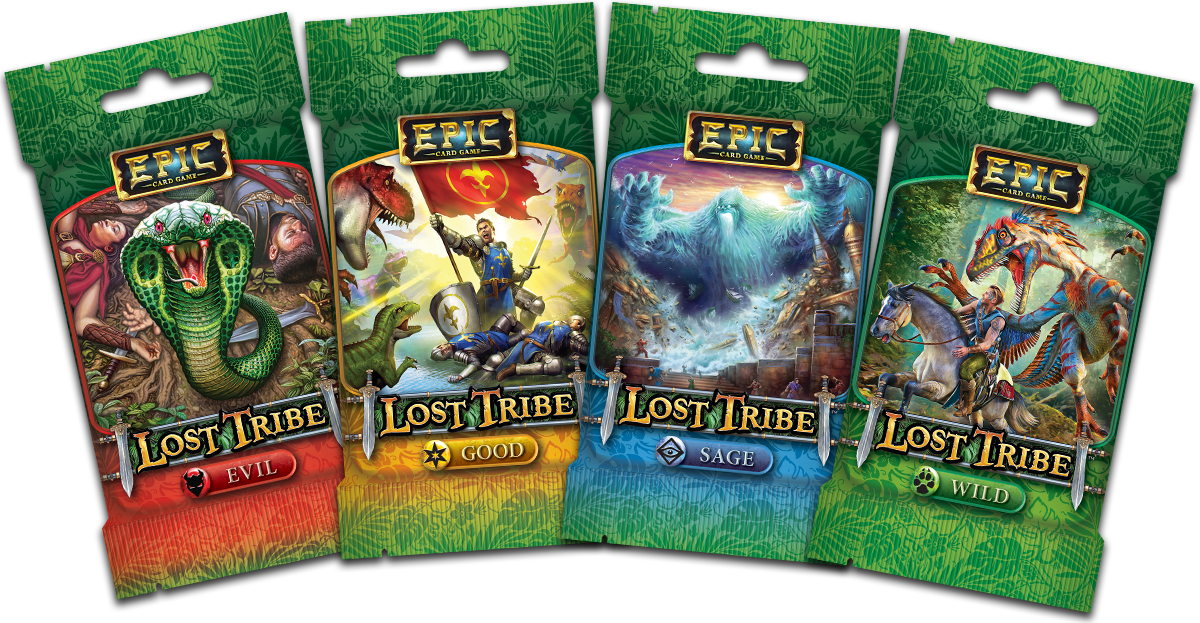 This sturdy box ($29.99) is large enough to hold every Epic card, with or without sleeves, with room to spare. If you take out the foam blocks! The plastic dividers are thick and look and feel really nice. They will include dividers for every set, each alignment, and four constructed decks.The rows are long enough to hold a rolled-up playmat. If a row has extra space, you may use the included foam blocks to hold cards snugly in place. This box also includes an all-new 12-card promo set! 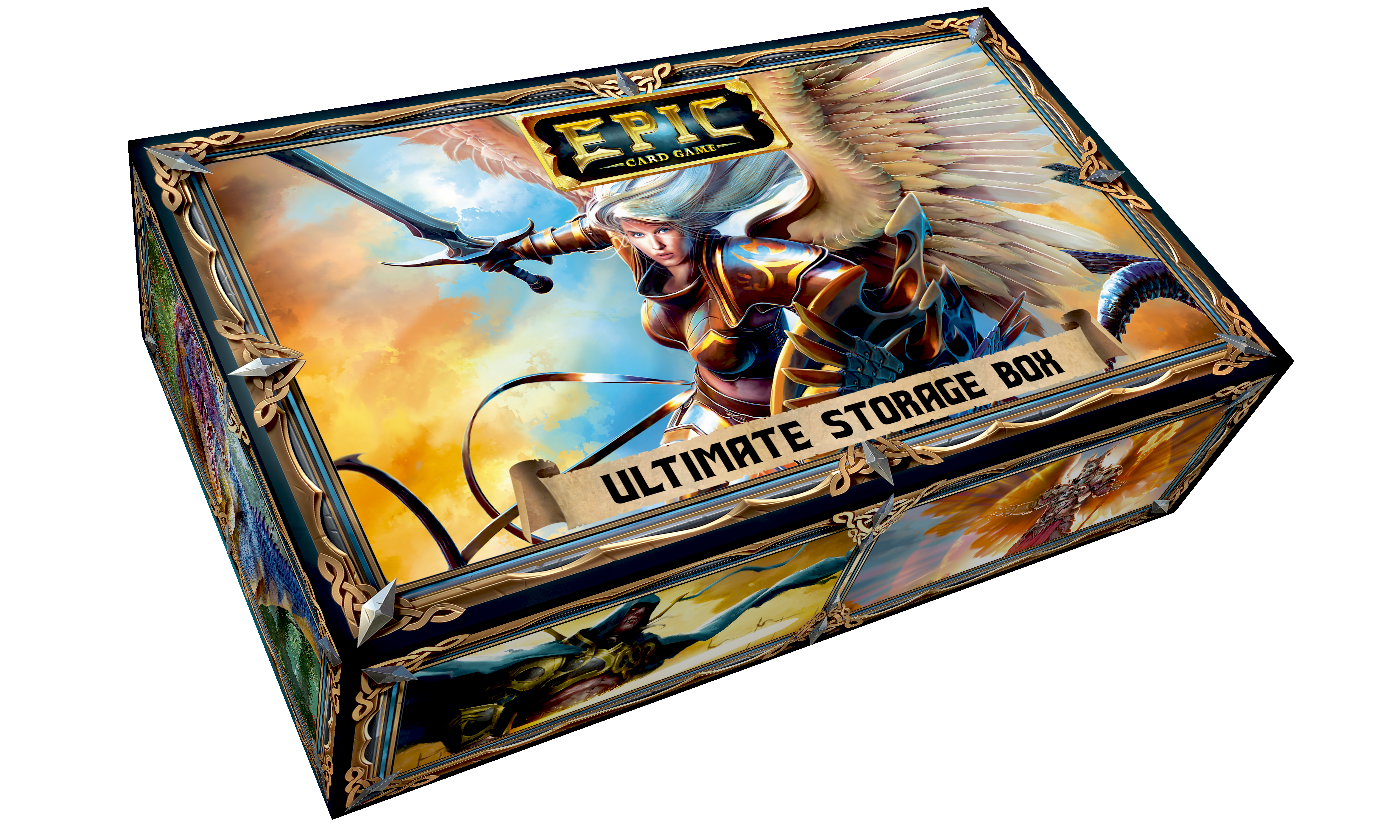 We’re really excited to share the news that these are now available in retail and we hope you enjoy these new awesome products! If you don’t have a game store near you, you can also find these online at the Wise Wizard Games E-Commerce Shop. You can join our Epic Card Game and Star Realms Community on Facebook or over on our Discord server, here.