I’ve been playing Star Realms for a couple of years now. I started out as a play-tester before the Kickstarter went live in October 2013, and I’ve been obsessed with it ever since. Sadly, this obsession has not made me a top-ranked player or even one of the top 1000 (currently), but it’s been a TON of fun. I don’t think a day has gone by where I have not played at least a few games during the day. However, for the past few months I have been stuck on the same level. Some of you out there can probably relate to my frustration. I have reached Level 13 several times only to be bumped back down to Level 12 time and time again. It seems impossible to reach that next level and stay there. So, I have to ask myself…What am I doing wrong? In this post, I will walk you through my thought process in a game against Darwin Kastle, the game’s designer, and get some pointers from the man himself! 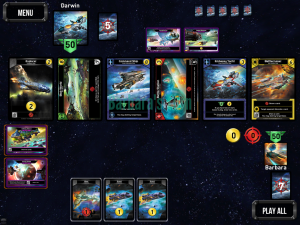 In this game, we are using the new Events and Bases and Battleships cards from the Crisis Expansion, as well as the Gambits and Year One Promo cards. As you can see, there is a Command Ship out on the opening board. The first few turns of the game were a race to see who could buy the Command Ship, with me buying an Embassy Yacht and each of us buying multiple Explorers in order to boost our trade. By Turn 3, Darwin had purchased a Trade Pod and a Trade Wheel, making me nervous that he would buy Command Ship first. In this turn, he also scrapped his Smuggling Run gambit to buy a freighter. 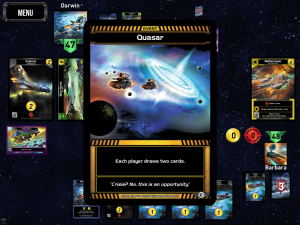 Luck was on my side though, and I was able to buy it first, with the help of a well-timed Quasar event, which allowed me to draw two more cards. On his turn, Darwin bought Blob World and proceeded to buy some little Blob cards to go with it. 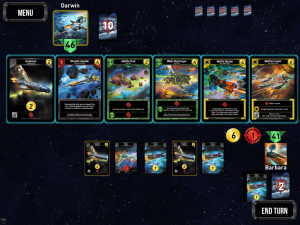 On my fifth turn, I was faced with a dilemma. Should I get Stealth Needle to use, hopefully, with my Command Ship, or should I pick up some of the green cards so that Darwin couldn’t buy them to use with his Blob World? Battle Cruiser was also an attractive option as was the Battle Barge. I decided to take the Stealth Needle and hope he didn’t kill me first with all of his Blob cards. Normally, I wouldn’t buy a Stealth Needle so early in the game, especially with other great stuff on the board, but I thought it was worth it since I had Command Ship. 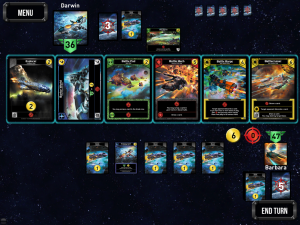 The board for turn 6 had a lot of good options, including a Battle Mech, a Battle Barge and a Battle Cruiser. I was tempted to buy the Battle Cruiser, since I could potentially copy it with my Stealth Needle, but I decided to go for the Battle Mech. I realized that I didn’t have any cards for scrapping in my deck, and I really wanted to thin my deck down at this stage of the game. 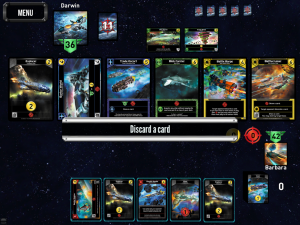 The Blob Carrier turned out to play a key role in the game’s outcome. On Turn 10, I copied it with my Stealth Needle and was able to acquire not one, but two, Battle Barges for free onto the top of my deck. I drew a Battle Barge immediately with my Missile Mech, since it allied with the Stealth Needle. On my next turn, I was able to overload the fusion core of my Battle Station that I had drawn that turn and win the game!

I think the Events and the Stealth Needle really helped me win this game, as did the early purchase of Command Ship. The Events really seemed to be kind to me in this game, giving me some great trade in the early game through card drawing.

Here are Darwin’s thoughts on the game:

Barbara: Darwin, why did you choose to buy Blob World once I bought Command Ship? What is the benefit of taking that over say Battlecruiser, which lets you draw a card, or trying to build your trade and authority with Embassy Yacht?

Darwin: Once you had Command Ship, I felt I needed to answer with a powerful acquisition of my own. I had just picked up the Trade Pod and the Trade Wheel, so I thought that I might have a shot at making the Blob World into a powerful force to rival your Command Ship. I had built up my trade to go after the Command Ship, but now I planned to commit those resources to an all-out Blob build up.

Barbara: On Turn 7, you purchased Central Office and Trade Escort. I typically think of Central Office as an early game purchase. What was your thought process in buying it in the mid-to-late game?

Darwin: I consider the Central Office a good early, mid and late game card. As the game goes on, the possibility of drawing a card with it every turn it’s in play go up. In the really late game, it allows me to put ships on top of my deck that I otherwise would have no chance of drawing before the game’s over. With you having Command Ship, I had extra incentive to scoop up powerful Federation cards like these.

Barbara: Did you feel that the Events in the game helped you or hurt you?  The events that popped up during the game were Quasar in the early game, Warp Jump in the mid-game and Trade Mission in the late game, which occurred during your turn.

Darwin: I feel the early game Quasar played a decisive role in the outcome of the game. We were in the middle of an early game trade escalation to acquire the Command Ship which I suspect I had the edge in (thanks in part to the presence of my Political Maneuver), when it came up in the middle of my turn. Had I drawn those two cards at the beginning of my turn, I would have just acquired the Command Ship. The Quasar struck after I had spent much of my trade and instead of ramping me to the Command Ship, it ramped you to it. While I enjoy the excitement of the random events, this one ended up costing me dearly.

Barbara: Do you have any advice on my game-playing? Is there something that I did or didn’t do that you would have done differently?

Darwin: Getting the Command Ship first definitely didn’t guarantee you the win. My Blob World plan gave me a legitimate chance to get back in the game. Your strategy of taking the Stealth Needle and a bunch of high end combat ships did an excellent job of shutting the door on my comeback attempt and beating me before I could really get the Blob World going nuts.

Barbara: Thanks for a great game, Darwin, and I look forward to playing all of you!