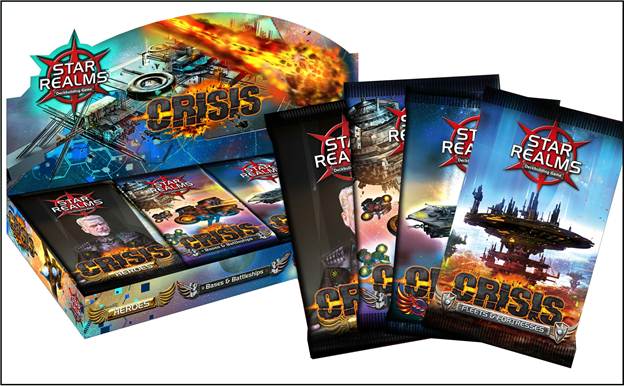 If there’s one question we at Wise Wizard Games hear more than any other (aside from “when is the game coming back into stock?!”), it’s “when are you doing an expansion?”  That’s why we’re very happy to announce the game’s first official expansion, Star Realms: Crisis, coming to your local game stores this holiday season!

Now a quick look at that top image may have you a bit confused, asking “what are those booster pack looking things?” Well Crisis is actually a set of four mini-expansion packs (MSRP $4.99), and each of the packs you see there includes twelve brand-new cards to help customize your Star Realms experience! This way, if there’s only one set of cards you’re really interested in, you only need buy that one pack. Though if you’re a major Star Realms fan, you’ll likely want to purchase the entire set!

So, without further ado, let’s take a look at what Crisis has to offer: 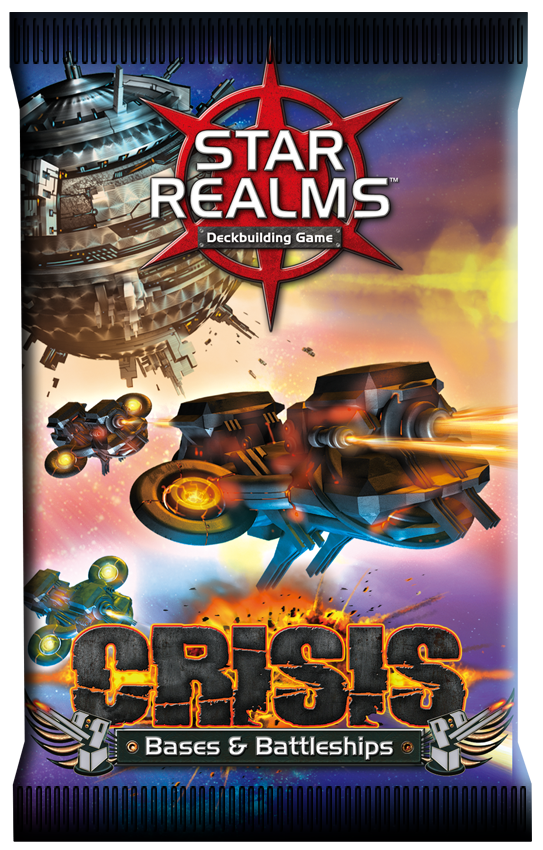 If you like to close out your games with big beefy battleships, this expansion pack is for you! Bases & Battleships includes a powerful new ship for each faction, along with eight additional ships & bases to add even more variation to your trade deck. 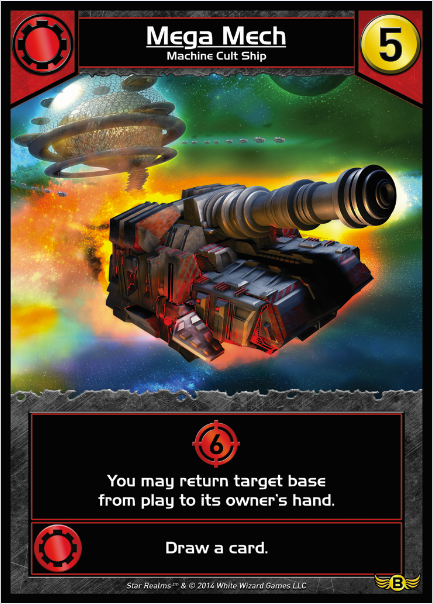 Here we see Mega Mech, one of the few cards in the game with the awesome ability to return bases to hand. Sometimes you’ll want to bounce your opponent’s Outpost to let your fleet slam in for big damage, but even cooler is returning one of your own powerful bases to hand so you can play it again! 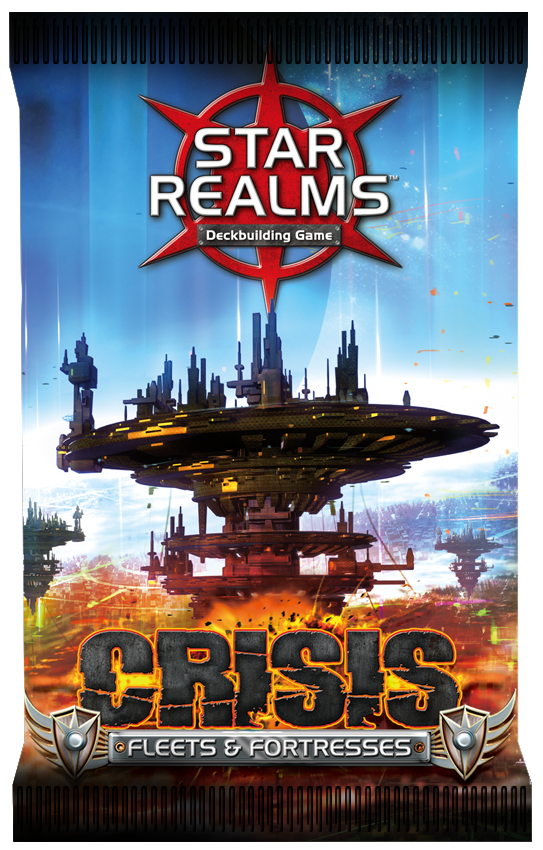 Fleets & Fortresses is for those players who like to stock their side of the board with behemoth bases. The expansion pack is loaded up with a powerful new base for each faction, as well as eight new ships with a variety of cool abilities. 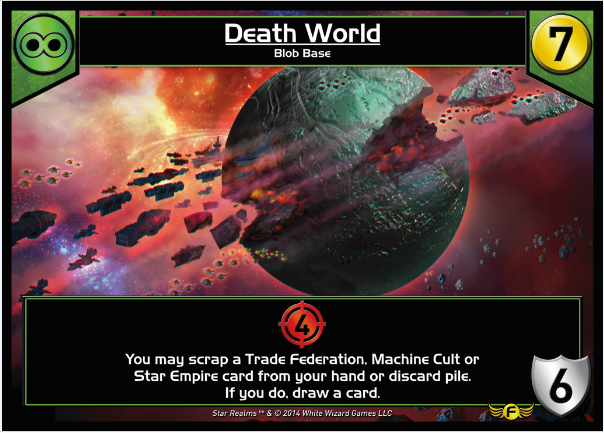 Death World will definitely be a favorite for Blob players, not only adding a massive four combat, but letting you remove off-faction cards from your deck in return for card draw. Very awesome. 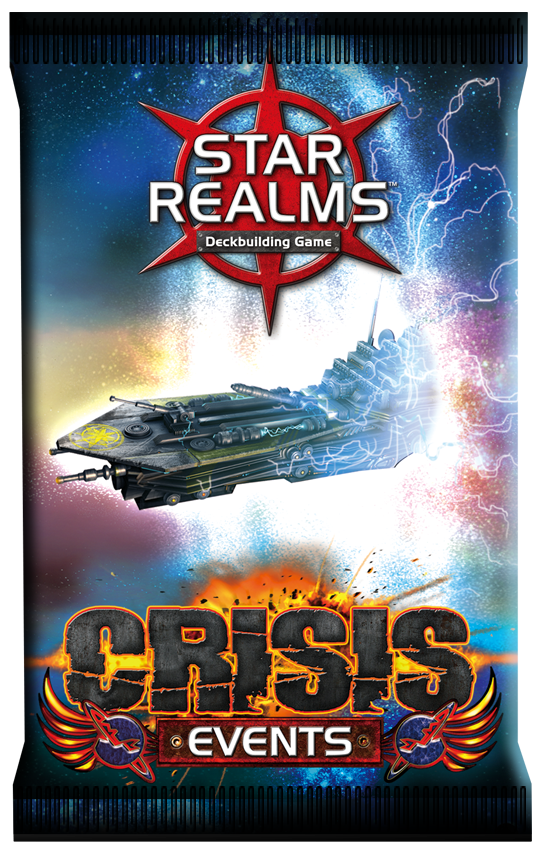 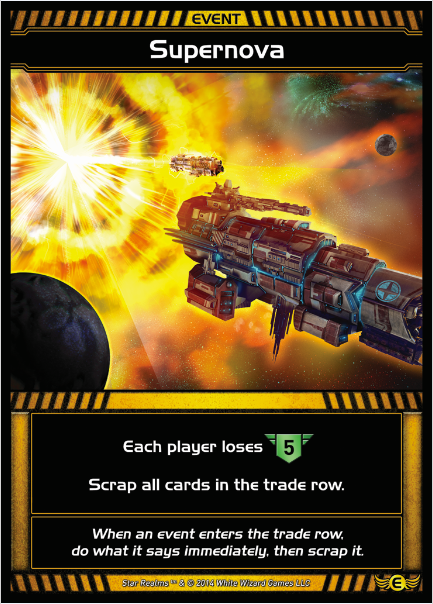 Supernova is a great example of how an Event can impact the board, sweeping the trade row clear while blasting each player for five authority. Events really are a ton of fun, especially in multiplayer! 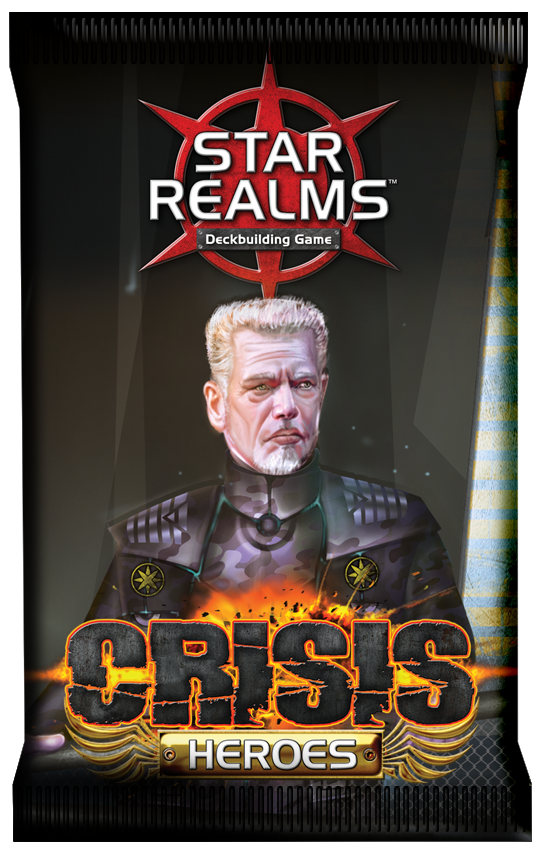 The Heroes booster adds our second new card type to the game. Heroes are unique, because unlike other Star Realms cards, they immediately enter play when purchased! Each hero has a scrap ability which provides both a specific effect, as well as turning on ally abilities for the turn. 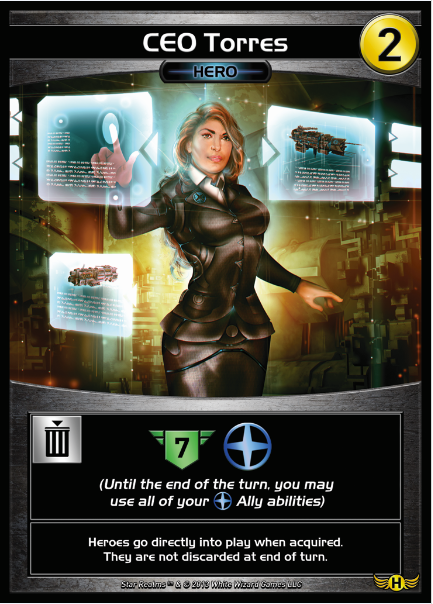 CEO Torres is a great buy for any player, letting you turn that extra 2 Trade into a quick 7 Authority. However the Trade Federation player will also get to activate their fleet’s ally abilities, and really put this powerful business-commander to good use!

Again, Star Realms: Crisis will be available this holiday season, so keep checking back for the official release date, as well as additional Crisis spoilers. Let us know in the comments if you have any questions about Crisis, and as always, keep conquering those Star Realms!