We are absolutely thrilled to be awarded the Table Top Game of the Year Award by SXSW last night. The ceremony was held at the amazing Austin City Limits venue. As award nominees, we were able to attend the VIP Special Access Reception and snagged front row seats to an amazing show. And the SXSW Gaming Award looks totally cool! (pictured here with Rob!) 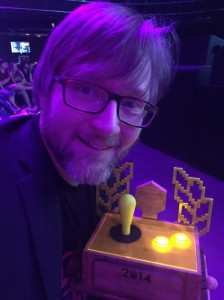 Thank you everyone in our community for voting for us! We love our community and we know that it is our fans that truly decide how great our game is. This award comes just after we recently won four  Golden Geek Awards from BoardGameGeek, and we are so happy to see so much love for Star Realms.  There are more details in the press release below. You can also watch the clip of Rob Dougherty, CEO of Wise Wizard Games and co-creator of Star Realms, accepting the award here.

On the heels of winning four Golden Geek Awards from BoardGameGeek.com, Star Realms has another major victory with a SXSW Table Top Game of the Year Award.

This year Table Top was added as a new category, and Star Realms took home the first ever SXSW Table Top Game of the Year Award. The Table Top Award was introduced in a video by Wil Wheaton, an actor and blogger most well-known for his role as Wesley Crusher on Star Trek: Next Generation. This award comes just after the recent announcement that Star Realms was awarded four Golden Geek Awards by BoardGameGeek, including Best 2-Player Board Game, Best Card Game, Best Indie Video Game, and Best Mobile Video Game.

“The Star Realms team is so thrilled to receive the Table Top Game of the Year Award from SXSW,’ said Rob Dougherty, CEO of Wise Wizard Games, maker of Star Realms,”We are having a blast at SXSW playing Star Realms with long-time fans and showing the game to new players at the Gaming Expo.”

“We were really excited to add the Table Top category this year, and saw an amazing turnout from the gaming community to vote for their favorite games on the Wikia voting page,” said Justin Burnham, SXSW Gaming Project Manager. “The nominees for the Table Top category included Dead of Winter, Five Tribes, King of New York, Sheriff of Nottingham, and Star Realms. Congrats to the Star Realms team for its Game of the Year win!”

In all, 21 awards were handed out, with Dragon Age: Inquisition taking the top honor as Game of the Year. Middle-earth: Shadow of Mordor followed with three award wins, including Excellence in Gameplay and Excellence in Animation. Speedrunners was chosen by gamers on the show floor to take home the Gamer’s Voice Award, beating out 29 other games showcased in the SXSW Gaming Indie Corner. Here is the full list of winners from the second-annual SXSW Gaming Awards:

Game of the Year: Awarded to the indie or mainstream game that exemplifies gaming excellence.

Mobile Game of the Year: Awarded to the mobile game that exemplifies gaming excellence

Table Top Game of the Year: Awarded to the table top game that exemplifies gaming excellence

Excellence in Gameplay: Awarded to the title that exemplifies excellence in gameplay mechanics

Excellence in Technical Achievement: Awarded to the title that exemplifies excellence in technical achievement

Excellence in Visual Achievement: Awarded to the game that best exemplifies stunning visuals

Excellence in Narrative: Awarded to the title that exemplifies excellence in game narrative

WINNER: The Wolf Among Us – Telltale Games

Excellence in Design and Direction: Awarded to the title that exemplifies excellence design and direction

Excellence in SFX: Awarded to the title that exemplifies excellence game sound effects

Excellence in Musical Score: Awarded to the title that exemplifies artistic excellence in musical score, and how it is used to progress the narrative of a game

Excellence in Convergence: Awarded to the game that best exemplifies excellence in the crossover to other entertainment mediums such as film, music, toys, animation, sports and more

Most Valuable Character: Awarded to the best game character that left an overwhelming impression

WINNER: Ellie, The Last of Us: Left Behind – Sony Computer Entertainment/Naughty Dog

Most Valuable Esports Team: Awarded to the professional team that excelled in performance and provided the most valuable impact in its competitive scene(s)

Most Valuable Online Channel: Awarded to the gaming-related channel that consistently entertains and keeps us watching with its humor, stories, special effects and more

Most Valuable Add-On Content: Awarded to the best additional content or DLC that added even more value to a great game making the experience that much better

WINNER: The Last of Us: Left Behind – Sony Computer Entertainment/Naughty Dog

Most Anticipated Crowdfunded Game: Awarded to the most highly-anticipated crowdfunded game, through such platforms as Kickstarter, Early Access, Indiegogo, that lived up to expectations or has yet to grace our collections

Matthew Crump Cultural Innovation Award: Awarded to the title that most challenges the “norm” of everyday gaming, and offers a culturally innovative view of a game world, character or gameplay

WINNER: This War of Mine – 11 Bit Studios

Gamer’s Voice Award: Awarded to the favorite game in the Indie Corner as decided exclusively by gamers on the SXSW Gaming Expo floor

Star Realms is a spaceship combat deckbuilding game designed by Magic Pro Tour Champions and Hall of Famers Darwin Kastle and Rob Dougherty. The game offers all of the thrills of traditional trade card game style combat, combined with the fun of a deckbuilding game. It is affordable, portable, and expandable. Play powerful ships, destroy enemy bases or blast your opponent directly on your way to victory! Star Realms is developed and published by Wise Wizard Games.

SXSW Gaming is an integral part of the SXSW experience. This diverse and widely popular array of events combines well-loved elements of geek culture with the cross-console video game world. And it all happens in Austin, Texas, a true hotbed for the expanding gaming industry. With the Gaming Awards, panels, a free expo, rocking parties and exceptional demos, no event bridges the gap between industry insiders and the general public quite like SXSW Gaming.

The 22nd annual SXSW Interactive Festival returns to Austin from Friday, March 13 through Tuesday, March 17. An incubator of cutting-edge technologies and digital creativity, the 2015 event features five days of compelling presentations and panels from the brightest minds in emerging technology, scores of exciting networking events hosted by industry leaders and an unbeatable lineup of special programs showcasing the best new websites, video games and startup ideas the community has to offer. From hands-on training to big-picture analysis of the future, SXSW Interactive has become the place to preview the technology of tomorrow today. Join us in March 2015 for the sessions, the networking, the evening events, the 18th Annual SXSW Interactive Innovation Awards, SXSW Accelerator, the SXSW Gaming Expo, the SXSW Trade Show, SXSW Create, the Digital Creative Job Market, cross-industry conversations with attendees from SXSW Film and  SXSW Music, and, most of all, the unforgettable inspirational experiences that only SXSW can deliver.