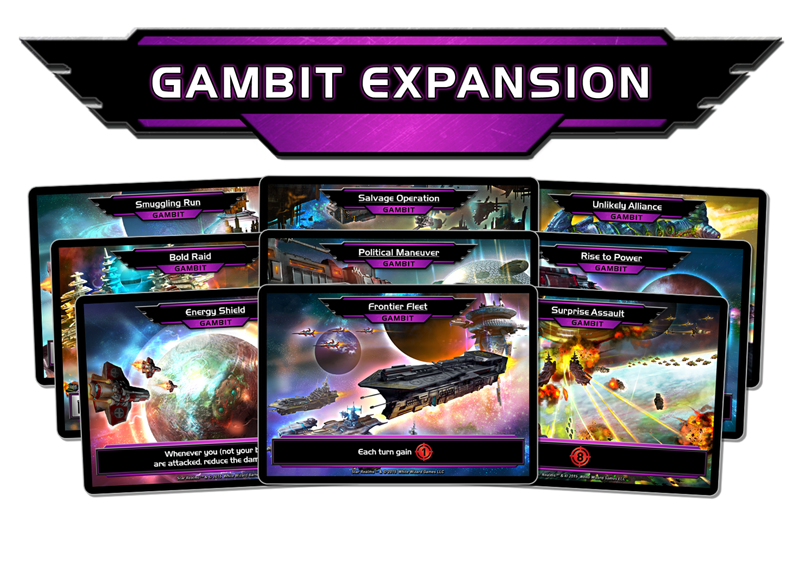 The countdown has begun. In about 48 hours, we will be releasing the digital Gambit Expansion for Star Realms.  We will be posting the PC and Mac versions of the digital Gambit Expansion for Star Realms on our Download Page at 12:01 am EST, this  Thursday, March 5th. The expansion is also planned for release on iOS and Google Play on Thursday, pending approval by the Apple and Google Play stores. You have to have it, right? How much does it cost? The price is $3.99, and it requires purchase of the base game ($4.99). Like the base game, once you purchase the digital Gambit Expansion once, you can play it across all platforms (PC, Mac, iOS, Android).

When the user purchases the Gambit Expansion, they receive the following for all four platforms: Fifteen new ship and base cards added to the trade deck: All users who download the update, even if they do not purchase the expansion, will receive the following new features: I got the chance to personally test out the Gambit Expansion, and it is very easy to use. Basically, you can choose whether or not you want to play with the new Gambit Expansion. If you have the Gambit Expansion selected, when you challenge a player or play “New Game” online, all of the Gambit Expansion cards mentioned above will be included in the game. Each player gets two randomly selected Gambit cards at the beginning of the game that they can use at any time. The new ship and base cards are mixed in with the trade deck. And the battle begins… my favorite so far is the Battle Screecher. Would love to hear your feedback and/or questions in the comments.

Would you like to know more? Good, because we have a livestream Twitch scheduled with our game designers, Rob Dougherty and Darwin Kastle, this Wednesday at 7 pm EST.  Join us live on the Star Realms Twitch Channel. Rob and Darwin will also be featured on the Megahaulin Podcast this week. Follow us on Twitter and Like us on Facebook to get updates on these types of events.